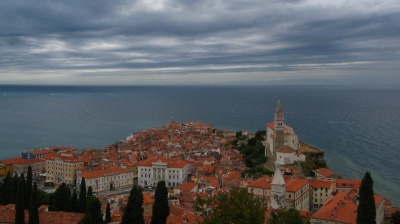 Leaked phone recordings that led to Croatia declaring the border arbitration concerning Piran Bay (pictured) was corrupted were made by the Croatian Intelligence Agency (SOA).
By Carmen Simion in Bucharest April 10, 2019

The Slovenian foreign affairs ministry has recalled the country’s ambassador to Croatia for consultations following reports that Croatian representatives tried to influence the reporting of a Slovenian media outlet on the activities of the Croatian intelligence in Slovenia.

Relations between Croatia and Slovenia have been deteriorating in the last few years since the two countries were unable to settle a border dispute. Croatia refuses to accept the July 2017 Permanent Court of Arbitration (PCA) ruling giving Slovenia access to the high seas through Piran Bay, claiming the process was corrupted. Zagreb’s stance is that it will not accept the ruling after a Slovenian official was discovered trying to influence the outcome back in 2015.

Local media reported earlier in April that the leaked phone recordings that led to Croatia declaring the border arbitration corrupted were made by the Croatian Intelligence Agency (SOA).

Excerpts from a leaked tape were published by Croatian daily Jutarnji List in July 2015. They appear to show the Slovenian representative in the arbitration tribunal, Jernej Sekolec, discussing strategy with Simona Drenik, the Slovenian finance ministry’s representative before the court. The transcripts revealed disclosure of confidential information and a joint plan to influence other judges.

Days after the release of the tapes, the Croatian parliament voted unanimously in favour of withdrawing from the arbitration. Croatia’s then prime minister Zoran Milanovic told MPs that while the tribunal may continue to work, “we won't recognise any of its decisions”.

Slovenian media now report that Croatian officials tried to influence the reporting of commercial broadcaster POP TV on the activities of the Croatian intelligence service, STA news agency reported. On April 8, POP TV reported that the Croatian government had used an intermediary to try to prevent the news portal from revealing the fact that SOA was responsible for the wiretapping in the border dispute.

“Recently, inadmissible activities of the Croatian secret service targeting Croatia’s neighbours, Slovenia among them, have been made public. In democratic Europe and the world at large, foreign interference and pressure exerted on editorial policies are deemed unacceptable. The Croatian ambassador, Boris Grigić, has been summoned to the foreign ministry, and Slovenia's ambassador to Croatia, Smiljana Knez, recalled for consultations,” the Slovenian foreign affairs minister said in a statement.

“Any pressures on the media are inadmissible and contrary to the fundamental principles of democracy. If such pressures are conducted by a foreign government, this indicates a major democratic deficit and a shift away from the fundamental European values,” he said.

The Croatian government has rejected the allegations made by Slovenia, while SOA called the reports in the Slovenian media “untrue and tendentious fabrications”, according to Total Croatia News.