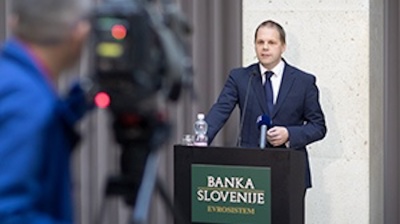 Jurij Zitko, director of the Bank of Slovenia’s legal department, urged lawmakers not to adopt the legislation.
By bne IntelliNews October 23, 2019

Slovenia’s parliament has adopted legislation on bank bail-in repayments that would make the central bank liable to pay damages in any lawsuit arising from the 2013 banking system overhaul, Reuters reported.

The Slovenian authorities stepped in to recapitalise several major banks in the country and poured some €3bn into the banking system in late 2013, with the aim of stabilising the financial sector and avoiding an international bailout. At that time the sector was burdened by a large amount of bad loans. Six banks — Nova Ljubljanska Banka (NLB), Nova Kreditna Banka Maribor (NKBM), Abanka, Banka Celje, Probanka and Factor banka — received capital.

As part of the banks' overhaul a total of around €600mn of subordinated bonds were scrapped. Many former subordinated bond holders and shareholders are now suing the banks and the central bank to get their money back.

Both Slovenia’s central bank and the European Central Bank have said that making the central bank liable for any damages arising from court cases related to the bank rescue breaches EU financial regulations.

In a statement issued on October 16, the Bank of Slovenia warned MPs over the legislation, saying that while the central bank welcomed the government’s intention to regulate judicial relief for holders of subordinated debt, but “the solution currently proposed does not provide for it”. It argued that the bill puts the Bank of Slovenia in a “substantially weaker position, which is unprecedented in Slovenia and the EU”.

On the other hand, the finance ministry has claimed the law is in line with a 2016 Constitutional Court ruling that urged the parliament to give greater legal protection to investors who lost assets during the 2013 bank rescue.