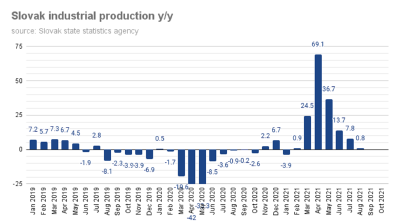 Slovak industrial output up by 0.8% in August
By bne IntelliNews October 12, 2021

Slovak industrial output recorded a moderate growth of 0.8% year-on-year in August,  slowing down for the fourth consecutive month, shows a report by the Slovak Statistics Office.

Compared to July figures, industrial output decreased by 3.8% in August, lagging 0.1% behind the pre-pandemic levels of August 2019.

“The company-wide holidays and slow production restart due to a lack of chips in the automotive factories resulted in an almost one-third drop in production,” the statistics office said.

"Weak output figures can largely be ascribed to the problems with supplies that complicate production chiefly in the automotive industry. The low figures were also partly a result of the effect of company-wide operational breaks that moved to the second summer holiday month more than before," said UniCredit Bank analyst Lubomir Korsnak.

The most significant drop, up to 32.9% y/y, was recorded by the driving force of the Slovak economy – the production of transport devices – which significantly hampered the overall growth of industrial production, lagging behind the production pre-pandemic level by more than a third.

Industrial production was positively influenced the most (for the third month in a row) by metal production (up by 25.9% y/y), exceeding metal production in August 2019 by 26.6%. Production of rubber and plastic increased by 14.2%, electricity and gas supplies by 11.1% and electric appliances by 12.7%.

"More energy-intensive components of industry (metallurgy, chemistry) are beginning to feel rising energy prices, but they are able to reflect it in the final price of their productions only to a limited extent. It is, therefore, possible that at the end of the year we'll see a halt or even a decline in these segments of industry that were showing relatively dynamic growth over the past couple of months," added Korsnak.

In 8M21, industrial production increased by 15.5% y/y, driven mainly by a 17.8% growth in the production of transport devices, a 26.5% growth in metals and metal structures and a 26.9% growth in machinery and equipment. Production of coke and refined oil products went down by 6.8%.

Government to prepare a new package of measures to mitigate the effect of price increases and ensure Croatians don't see a fall in their standard of living.

Analysts expect the chip shortage to ease in H2, which could trigger a sharp rebound in industrial output.

Croatia’s population shrank almost one tenth in 10 years
22 hours ago
Net wage in Romania moves up in November to catch up with inflation
2 days ago
Croatia projects 2022 inflation at 3.5%
3 days ago
World Bank forecasts Georgian economy to grow by 5.5% in 2022, 5% in 2023
3 days ago
Hungary’s automotive industry becomes less of a drag on industrial growth in November
3 days ago