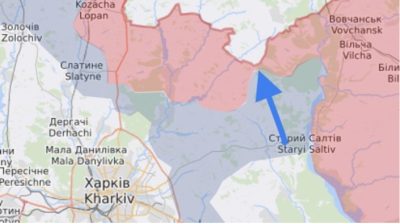 Ukraine’s counter-offensive in the region began on May 8 and saw surrounding villages come back under Ukrainian control.
By Dominic Culverwell in Berlin May 17, 2022

Ukrainian troops have pushed through to the northeast border with Russia in Kharkiv Oblast in a major setback for Moscow, the Kyiv Post reported on May 16.

Footage shows the 227th battalion of the 127th Territorial Defence Regiment reaching the border and erecting a new boundary. The elated troops then declare the area to be totally clear of Russian forces and under Ukrainian control.

Ukraine’s Army General Staff reported that Russian troops are now concentrating “basic efforts on maintaining positions and preventing the promotion of (Ukrainian) troops towards the state border”, in an update on May 16.

Ukraine’s advance in the north-east is an impressive turnaround after Russian troops had attempted a siege on Kharkiv, Ukraine’s second-largest city, for two months and indiscriminately shelled civilian areas, killing hundreds of people. Ukraine’s counter-offensive in the region began on May 8 and saw surrounding villages come back under Ukrainian control thanks to a combined effort from Territorial Defence Forces, National Guard units and civilian volunteers.

“The Russians were constantly shelling Kharkiv because they were staying very close to the city,” the Mayor of Kharkiv Ihor Terekhov told the BBC. “Now it is calm in Kharkiv and people are gradually coming back to the city. We provide water, gas and electricity supply to all the citizens. However, unfortunately, many residential buildings are destroyed or damaged. So, in the future we will have to do huge reconstruction.”

Kharkiv suffered some of the worst attacks in Ukraine. Ukrainian Prime Minister Denys Shmyhal announced last month that an additional UAH250mn (€8.1mn) will be allocated to help the region recover.

The Ukrainian success in Kharkiv will likely drag down Russia’s morale even further as Russian troops are also failing to make any significant progress in Donbas and have suffered major losses.

“Russia’s Donbas offensive has lost momentum and fallen significantly behind schedule”, the UK Ministry of Defence tweeted. “Despite small-scale initial advances, Russia has failed to achieve substantial territorial gains over the past month whilst sustaining consistently high levels of attrition. Russia has now likely suffered losses of one third of the ground combat force it committed in February”.

"We are preparing for new attempts by Russia to attack in Donbas, to somehow intensify its movement in the south of Ukraine," he said in his nightly address on May 15.