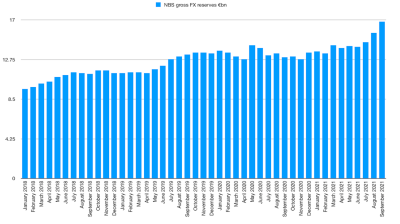 The National Bank of Serbia (NBS) said in a statement on October 11 that its gross foreign exchange (FX) reserves stood at €16.8bn at the end of September, €1.2bn more than in August.

At the same time, net FX reserves (FX reserves less banks’ FX balances on account of required reserves and other requirements) equalled €14.2bn, up by €1.1bn from end-August. The increase in gross FX reserves in September is primarily attributable to the inflow of euros from two issues of eurobonds in the total amount of €1.7bn, the NBS said.

For the first time in its history, Serbia issued a green eurobond, with a nominal value of €1.0bn. The bond had a seven-year maturity, at the lowest coupon rate ever of 1.00% and the yield rate of 1.26%. At the same time, Serbia issued a €750mn, 15-year conventional eurobond, the longest maturity eurobond ever issued by the Republic of Serbia, the NBS added.

Net inflows to FX reserves during September were also achieved on account of the NBS’s activities in the local FX market (€165.0mn net), FX reserves management, donations and other sources (€199.6mn net total).

These inflows were more than sufficient to cover the outflows in respect of net government credit debt repayment and securities (€865.5mn, of which €619.8mn was used for the repayment of the remaining portion of the dollar eurobond issued in 2011) and outflows on other grounds (€16.1mn in total).

Another factor driving FX reserves up in September was the positive effect of market factors in the net amount of €26.4mn.

September trading volumes in the IFEM amounted to €577.7mn, up by €26.6mn on the month before. In the first nine months of 2021, interbank trading volumes reached a total of €4.7bn, the NBS stated.

In September, as in the year so far, the value of the dinar vis-à-vis the euro remained broadly unchanged. The NBS purchased €135.0mn net in the IFEM during the month. Since the start of the year, the NBS bought €1,100.0mn net in order to maintain relative stability in the FX market.