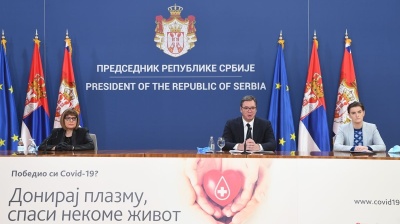 President Aleksandar Vucic announced that a general election will be held on June 21.
By Denitsa Koseva in Sofia May 5, 2020

Serbia’s government said it will end the state of emergency on May 6 as the number of new coronavirus (COVID-19) cases is constantly falling. A few hours later, President Aleksandar Vucic announced that a general election will be held on June 21.

Serbia has one of the largest coronavirus outbreaks in the Central and Southeast Europe region, with 9,464 confirmed cases as of May 4. The country declared a state of emergency in mid-March but gradually started to ease restrictions in the past week.

“Considering all current parameters, in the proposal sent to the national assembly is pointed out that COVID-19 can no longer be considered a disease of public significance that represents a danger of highest degree, respectively a public danger that threatens the survival of the state and its citizens,” the government said in a statement late on April 4 following a session.

The proposal still has to be approved by the parliament but as the ruling party enjoys a comfortable majority, the approval is not under question.

Meanwhile, late on April 4 Vucic said in a statement that he is calling a general election on June 21. The election, originally due to take place earlier this spring, was postponed due to the state of emergency.

Vucic said the date was set in accordance with requirements of opposition political parties that have agreed to participate in the election.

“We have accepted the ideas of some political parties who were seeking an additional five or six days for election works so the general election in the Republic of Serbia will be held on June 21,” Vucic said in a statement.

He added that, due to the health and safety measures, political parties will not hold gatherings or rallies in May. In June, rallies might be allowed if the health authorities estimate they would not endanger people.

Serbia’s general election is one of several that was due to take place this spring but put on hold as the pandemic engulfed the region.

Poland is going ahead with its presidential election on May 10, despite having even more coronavirus cases than Serbia. The ruling Law and Justice (PiS) is pushing for the vote to happen as scheduled despite the coronavirus pandemic having not peaked yet. That could pose a considerable danger to public health, the opposition and experts warn. Incumbent President Andrzej Duda is on course for a knock-out victory in the first round of voting, two recent opinion polls showed, not least because all his rivals have suspended their campaigns.

Meanwhile, like Serbia, North Macedonia suspended a snap general election originally planned for April 12. No new date has yet been set, and the procedures are unclear as the parliament was dissolved back in February.