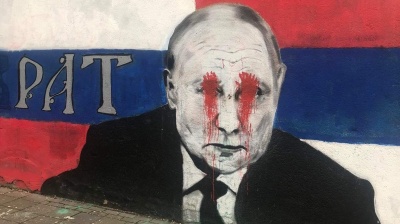 A defaced mural of Russian President Vladimir Putin in Serbia. The original caption "BRAT" (brother) has been changed to "RAT" (war).
By bne IntelliNews April 28, 2022

Serbia’s usually pro-Russian tabloids have suddenly turned on Russian President Vladimir Putin after he hinted that Moscow may give up its support for Serbia on the Kosovo issue.

Russia has used its position as a permanent member of the UN Security Council to block Kosovo — which unilaterally declared independence from Serbia in 2008 — from joining the UN, and has long been Serbia’s staunchest backer on the issue. This contributed to Serbian President Aleksandar Vucic’s decision not to impose sanctions on Russia, despite pressure from the EU and US.

However, on April 26, Putin talked of Kosovo’s declaration of independence as a precedent for the two self-declared republics in Ukraine’s Donbas region, raising fears in Serbia that Moscow is changing its position to secure its own goals in Ukraine.

According to a transcript from the meeting published on the Kremlin website, at the meeting with Guterres Putin likened the “decision on independence” by Ukraine’s Crimea and Sevastopol to that of the people of Kosovo. “The only difference between the two cases was that in Kosovo this decision on sovereignty was adopted by parliament whereas Crimea and Sevastopol made it at a nationwide referendum,” Putin said. “If so, the Donbas republics, the Donetsk People’s Republic and the Lugansk People’s Republic, can enjoy the same right without seeking permission from Ukraine’s central government and declare their sovereignty, since the precedent has been created.”

Guterres responded by pointing out that the UN does not recognise Kosovo.

Putin then replied: “Yes … but the court did”, referring to the International Court of Justice’s 2010 advisory opinion on Kosovo’s declaration of independence.

“If there is a precedent, the Donbas republics can do the same. This is what they did, while we, in turn, had the right to recognise them as independent states,” the Russian president said.

“It is a fact that many Western countries recognised Kosovo as an independent state. We did the same with the Donbas republics … I am well-versed in the documents of the International Court on the situation in Kosovo. In fact, I have read them myself. I remember very well the decision by the International Court, which states that when fulfilling its right to self-determination a territory within any state does not have to seek permission from the country’s central government in order to proclaim its sovereignty. This was the ruling on Kosovo, and this is what the International Court decided, and everyone supported it.”

A knife in Serbia’s back

Some Serbs interpreted Putin’s words as a facto recognition of Kosovo, and accused Putin of turning his back on Serbia for his own interest.

The usually staunchly pro-Russian Srpski Telegraf had as its front page headline: “Putin stuck a knife in Serbia’s back: he traded Kosovo for Donbas”.

The Daily Informer, another usually pro-Putin newspaper, led with “Global conflict over our backs: Putin plays on Kosovo”.

Danas quoted Serbian diplomat Srecko Djukic as saying that "by stating that the self-determination and independence of the Donetsk and Luhansk People's Republics (DNR and LNR) are based on the Kosovo precedent, [Putin] actually stated that he recognises the independence of Kosovo”.

"Russian President Vladimir Putin called for Kosovo's declaration of independence as an argument for the independence of the Donetsk People's Republic (DNR) and the Luhansk People's Republic (LNR), only showing that Russia's interests and position in the global political and economic earthquake are inviolable and more important than traditional friendships, like the one with Serbia,” the article in Kurir reads.

These headlines are in stark contrast to those in the months before the Russian invasion. Parts of the electoral are vocally pro-Russian, a position until now that has been encouraged by the media, with many outlets portraying Putin as a hero, while criticism of Russia was seen as anti-Serbian.

Putin and other Russian officials have frequently drawn parallels between Kosovo and Russia-backed breakaway statelets, not just in Ukraine but also in Georgia, and found a receptive audience among Serbs who mourn the loss of Kosovo and the 1999 Nato bombings.

Ahead of the invasion, the pro-Russian slant in the majority of Serbia’s media became increasingly obvious as hundreds of thousands of Russian soldiers and large amounts of military hardware were deployed along the Ukrainian border. As bne IntelliNews has reported, the situation became so extreme that the Ukrainian embassy to Belgrade called a press conference to refute some of the reports, and appealed for disinformation about the self-declared DNR and LNR not to be spread in Serbia.

As an aspiring EU member state that also has friendly relations with Russia, Serbia was in a difficult position when Russia invaded Ukraine — which happened just weeks before presidential, general and some local elections in Serbia at the beginning of April.

While Western governments announced sanctions when Russia recognised the independence of two separatist entities in eastern Ukraine, Serbian President Aleksandar Vucic delayed making an announcement until February 25, when he set out the case for Serbia not to join sanctions in an address to the nation.

The statement issued by the presidency on the evening of February 25 said Serbia respects Ukraine’s territorial integrity, but Vucic recalled Serbia’s own experience of Western sanctions during the wars of the 1990s and pointed to Russia’s support for Serbia at that time as well as Moscow’s support on the issue of Kosovo.

Despite not joining the sanctions, Serbia has backed key UN resolutions against Russia. At the emergency session of the UN on March 2, Serbia voted in favour of the resolution condemning the Russian aggression against Ukraine. On April 7, Serbia was among the countries that voted at the UN General Assembly to suspend Russia from the UN Human Rights Council for “gross and systematic violations and abuses of human rights" in Ukraine. However, this is not enough for EU officials, who have repeatedly stressed that as a candidate country Serbia needs to align its foreign policy with that of the bloc.

Shortly after polls closed on April 3, Vucic made it clear that he will continue with the increasingly difficult job of balancing relations between Russia and the West. Indicating that Serbia will continue to try to balance relations, Vucic added that the most important thing for Serbia is to have good relations in the region and to continue its European path, but not to ruin good relations with traditional friends.

Then just three days after the elections – at a time when most European governments were searching for ways to end their dependence on Russian gas – Vucic held a telephone conversation with Putin in which they discussed the imminent start of talks on a new long-term gas supply contract.

Despite the sudden spate of anti-Putin headlines in the Serbian media — including the government-linked Kurir — it’s not clear whether this is part of a wider change in Serbia’s position.

Vucic met on April 26 with the President of the Russian Duma Committee on International Affairs, Leonid Slutsky, and reiterated that Serbia will continue on its European path, while preserving friendly relations with Russia.

The same day, Vucic also met with the US Assistant Secretary of State for Europe and Asia Karen Donfried, at which the two discussed “current geopolitical issues” including “Serbia's attitude towards the situation in Ukraine”, a statement from the Serbian presidency said.