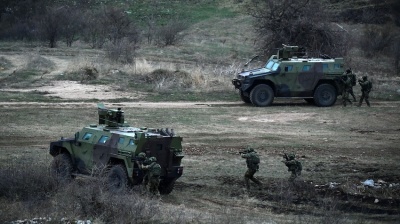 Revelations that Serbia received a Chinese anti-aircraft system in an unannounced operation have added to fears of a Balkan arms race, and sparked a war of words between Serbia’s President Aleksandar Vucic and the leaders of neighbouring Kosovo and Montenegro.

Six Chinese Y-20 transport planes with military markings were spotted at Belgrade’s Nikola Tesla airport on April 9, and local media and newswires reported that they were bringing in HQ-22 surface-to-air missile systems. While the delivery was not officially announced President Aleksandar Vucic said later in the day that he would present “the newest pride” of the Serbian military during the week.

The systems arrived at a time when there are concerns over the stability of the Western Balkans following Russia’s invasion of Ukraine. Serbia has so far refused to align with western sanctions on Russia, and Vucic reiterated after the April 3 general, presidential and local elections that the country will remain neutral, though Serbia has backed two key UN resolutions condemning Russian actions in Ukraine.

A Chinese diplomat sought to allay fears that the delivery was connected to the war in Ukraine. Foreign ministry spokesperson Zhao Lijian confirmed the delivery of “regular military supplies” to Serbia, but told reporters that the arms did not target any third parties and “had nothing to do with the current situation”, ABC News reported.

The delivery was reported as Serbia carried out its multi-day Fire Shield 2022 military exercise, with more than 1,000 members of the Serbian army taking part.

It also followed a series of weapons purchases by and donations to Serbia, and to a lesser extent by other countries in the region such as Croatia in recent years that has led to speculation about a mini Balkan arms race in a part of Europe where there are still long-running ethnic divisions that flare up periodically. The region has long been the subject of a struggle for influence between Russia and the West, with China also an important player.

Shortly after Russia invaded Ukraine, the EU stepped up its policing presence in both Bosnia & Herzegovina and Kosovo as the deteriorating international security situation raised fears that the Western Balkans was at risk of destabilisation.

Serbia’s decisions to secure weaponry from both China and Russia has also irked officials from the US and EU, who say Belgrade should seek to harmonise its military procurement with the West as it pursues EU membership.

On the other hand, speaking to Reuters on April 11 Vucic also confirmed recent reports that Serbia is interested in procuring 12 Rafale fighter jets from France’s Dassault Aviation. "We have been negotiating this purchase of 12 new jets for a year, and we are also looking at buying another 12 used [western] planes from another country," Vucic told the newswire.

The response among Serbia’s immediate neighbours to the Chinese delivery has been mixed, with those countries that have combative relations with Serbia — Kosovo and Montenegro — criticising the delivery, while Serbia’s partners in the Open Balkan initiative — Albania and North Macedonia — expressed no concern.

Prime Minister of Kosovo Albin Kurti said on April 12, as quoted by the Kosovan media, that the government is concerned that Serbia has bought weapons from China, but not scared.

"Serbia seems to me to be in a kind of panic when it realises that it cannot stay in three or four seats at the same time,” Kurti told a press conference, referring to Belgrade’s efforts to maintain good relations with both western powers and Russia and China.

"Serbia's continued armament is not harmless for the region and the Republic of Kosovo, but on the other hand, it is an expression of their fear that they may be left isolated," Kurti added.

Belgrade has refused to recognise Kosovo, which unilaterally declared its independence from Serbia back in 2008, as an independent country, and its position is backed by Russia. While the two countries are engaged in a normalisation dialogue, the situation occasionally flares up — as in September 2021 amid a dispute over car licence plates — and there are fears Russia may attempt to use the conflict to destabilise the region.

The presidents of both Montenegro and North Macedonia were also asked for their views on Serbia’s arms purchases on April 12 at a meeting in the Montenegrin city of Cetinje — the site of mass protests last summer amid a standoff between supporters of President Milo Djukanovic’s Democratic Party of Socialists (DPS) and the Serbian Orthodox Church, backed by Belgrade.

In response to a journalist’s question, Djukanovic said, that any armaments, including those received by Serbia, are worrying because there is a growing sense of security threats in Europe.

"Weapons in the Balkans are a special risk. We are generally worried about that. In this case, there is a prolonged tendency to arm Serbia from countries that appear to be open enemies of Europe and Nato," Djukanovic said, reported Jutarni List.

Montenegro’s relations wth Serbia — or more specifically between Djukanovic and the Serbian authorities including the Serbian Orthodox Church — have soured in recent years.

However, North Macedonia’s President Stevo Pendrovski said he did not see Serbia is a security threat.

Albanian Prime Minister Edi Rama also told a press conference in Germany on 12 April that he was not concerned. “I am not worried about the armament in question because I see no reason to worry … I do not see how a missile defence system can be of concern to us,” Rama said in response to a journalist question, a government statement said.

“Serbia has made extremely encouraging steps in both elections in the United Nations and it is really significant that, so far, the Balkans are together in positions against Russia. But of course Serbia has a historical, traditional position, different from ours,” he added.

Vucic later hit back at Djukanovic and Kurti, accusing them of spreading "hatred towards Serbs and Serbia”. The Serbian president went on to mock Kosovo’s and Montenegro’s military capacity, saying it would be better to buy mosquito repellent “because it is much more important for us to protect ourselves from swarms of mosquitoes than from any serious air force that they have”.