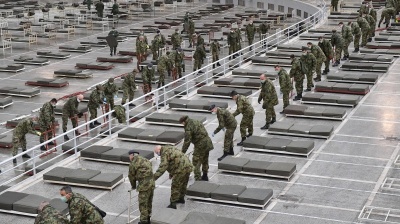 Serbia’s army has started turning an exhibition hall into a temporary hospital, where it plans to put 3,000 beds to accommodate people infected with coronavirus.
By bne IntelliNews March 24, 2020

Serbia’s army has started turning an exhibition hall into a temporary hospital, where it plans to put 3,000 beds to accommodate people infected with coronavirus (COVID-19), the government said in a statement on March 24.

Serbia decided to further tighten the measures aimed at limiting the spread of the virus, and turned to China for support, looking to learn from the Chinese experience in bringing the spread of the infection under control after the mass outbreaks in Hubei and Wuhan. The death tolls in both Italy and Spain have already surpassed that in China.

On March 23, President Aleksandar Vucic said that all infected people will be held in hospitals. According to an emergency plan, Serbia will turn exhibition halls at fairs, sports halls and campuses in Belgrade and other major cities into hospitals with thousands of beds where people who suffer mild symptoms will be accommodated.

The procedure will be monitored by Chinese medical experts who have arrived in Serbia to help the government with the crisis.

The country declared a state of emergency earlier in March and introduced a series of limitations immediately, including a curfew and the closure of public facilities and schools.

The new makeshift hospital was announced two days after the government tightened restrictions on movement for its citizens.

On March 22, the government decided to extend the hours when people are banned from leaving their homes. Nobody can leave their homes between 5pm and 5am. People older than 65 can only go out on Sundays between 3am and 8am to buy groceries. The government also stopped all public transportation.

Serbia’s Health Minister Zlatibor Loncar said that if the country sticks to the strict measures for 29 days, the situation will stabilise and the number of infected people will stop rising.

He has based his estimation on the opinion of Chinese experts who are helping the government to deal with the outbreak. These experts are expected to introduce additional measures that worked in China.

Serbia has a strong relationship with China, and is the top recipient of foreign direct investment (FDI) from China in the Western Balkans. Major Chinese-funded projects in the country include the Zeman-Borca bridge connecting two Belgrade suburbs and the ongoing upgrade of the Belgrade-Bucharest railway line.