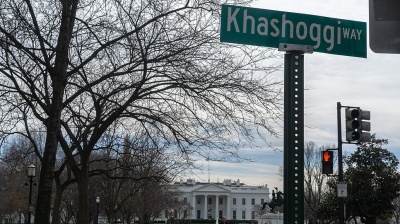 A "Khashoggi Way" street sign put up in front of the White House by activists.
By Akin Nazli in Belgrade June 24, 2021

Four Saudis who participated in the brutal killing of Washington Post journalist Jamal Khashoggi in October 2018 at the Saudi Consulate in Istanbul received paramilitary training in the US in 2017, The New York Times reported on June 22.

Paramilitary groups specialise in activities that the police and armed forces officially appear to eschew. They might include the extrajudicial torture and killing of dissenters, arranging the disappearances of local leaders, students and journalists, and the retaliatory abuse of activists' families, including the rape of women to humiliate their parents and pollute family lines.

The Khashoggi murderers trained in the US have also apparently participated in at least a dozen other crimes, including kidnappings, detentions and tortures in Saudi Arabia starting from 2017. A harrowing detail of the Khashoggi case is that it is thought his body was dismembered with the use of a bone saw.

One of the company’s founders, Steve Reichert, has worked for the infamous private military company Blackwater.

The US State Department in 2014 during the Obama administration approved the paramilitary training contract for the men who were to become part of the death squad that killed Khashoggi. The training was still taking place during at least the first year of the Donald Trump term of office.

Two of the murderers had participated in a previous training module, which ran from October 2014 to January 2015, Louis Bremer, a senior executive of Cerberus, informed The New York Times.

“All foreign personnel trained by Tier 1 Group are cleared by the US government for entry into the US before commencement of training,” he added.

Decisions on granting licences to American firms to train foreign nationals are usually taken after input is obtained from numerous government agencies, including the Pentagon and intelligence agencies, Clarke Cooper, the assistant secretary of state for political-military affairs during the Trump administration, told the newspaper.

“No government is going to flush a significant bilateral relationship over this murder, no matter how horrific it was,” he added.