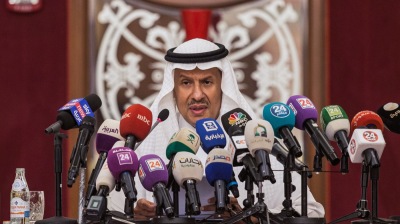 Saudi Arabia has already restored 2mn barrels per day (bpd) of oil production from the 5.7mnbpd that were knocked out by drone missile strike
By Ian Simm in Edinburgh September 18, 2019

Saudi Arabia has already restored 2mn barrels per day (bpd) of oil production from the 5.7mnbpd that were knocked out by last weekend’s drone and missile attack on its largest production facilities at Abqaiq and Khurais.

The Kingdom has pledged to restore all 5.7mnbpd of oil production by the end of September and has already restored half of the capacity that was damaged by the attacks, Saudi Energy Minister Prince Abdulaziz bin Salman told a press conference on September 17.

“During the two past days, we managed to contain the damage by recovering more than half of the production that we had lost during that terrorist attack,” bin Salman said at a briefing in Jeddah. “The company will be able to meet all its commitments to customers this month by drawing on its crude oil reserves.”

Abqaiq is now processing about 2mnbpd, Aramco Chief Executive Officer Amin Nasser said, as cited by Bloomberg. The facility should return to pre-attack levels of about 4.9mnbpd by the end of September, he said.

The oil market has welcomed the announcement, which removes mounting uncertainty over the long-term supply outlook. On September 16, CNBC quoted a Saudi source as saying that Aramco had 35-40 days of supply to meet contractual obligations, while members of the International Energy Agency (IEA) have reserves to cover 90 days’ worth of imports.

US President Donald Trump had said the Strategic Petroleum Reserve (SPR) could be tapped to ensure there is no supply shortfall.

“We are in the process to bring back oil refining to full capacity,” CNBC quoted bin Salman as saying. “The company will honour all of its commitments to its customers this month by drawing from its reserves of crude oil and further modified some of its oil until the production capacity of the country is up to 11mn barrels a day by the end of September and up to 12mn barrels in November.”

The targeting of Abqaiq was as symbolic as it was devastating. Crude processing facilities there deal with crude from Ghawar, the world’s largest oilfield, which produces 3.7mn bpd. Last year, Abqaiq facilities processed around 5mn bpd, more than half of Saudi output.

Its location is also important, just 66km south of Aramco’s Dhahran HQ, and the attack shows that the prized export facilities on Saudi’s East Coast may now be within range of Yemeni Houthis.

Abqaiq is the main strategic hub for Aramco’s exports too. From there, flows can be manipulated to go east to Ras Tanura and Jubail or west towards Red Sea export facilities at Yanbu, Jeddah or Jazan via the East-West pipeline, which has also been the subject of drone attacks.

According to the 469-page bond prospectus published by Aramco in April, the Khurais complex, including the Abu Jifan and Mazalij satellite fields as well as Khurais itself, is the fourth largest onshore oilfield in the world, comprising 20.1bn barrels of crude.

It has a maximum sustainable capacity (MSC) of 1.45mn bpd at the end of last year, following commissioning of a 250,000-300,000 bpd expansion. Aramco will make a public statement on September 16.