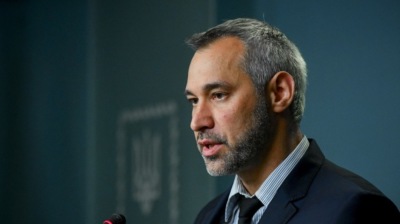 Riaboshapka has been accused of lying on his official income declaration and corruption.

"There was a ruling by the High Anti-Corruption Court, which we complied with, and we entered information into the Unified Register of Pretrial Investigations according to preliminary qualification of Article 366-1 (declaring false information) and Part 4 of Article 368 of the Criminal Code of Ukraine (accepting an offer, promise or receiving a bribe by official)," SAPO's press service said in a statement as reported by UNIAN.

Riaboshapka was sacked in March as part of an extensive government reshuffle that saw many of the leading reformers and technocrats replaced. Analysts have called the reshuffle an attack on government by Ukraine’s oligarchs, including, but not limited to, oligarch Ihor Kolomoisky.

Riaboshapka was fired by President Volodymyr Zelenskiy due to his alleged failure to prosecute high-profile crimes. But his firing was widely condemned by Ukraine’s western partners, who saw Riaboshapka as one of the few genuine reformers in the government.

“The Specialized Anti-corruption Prosecutor's Office (SAPO) has opened a criminal case against former Prosecutor General Ruslan Riaboshapka. Most disturbing development. Nobody has done more for law and order in Ukraine than Riaboshapka,” Anders Aslund tweeted, a Swedish economist and a Senior Fellow at the Atlantic Council. 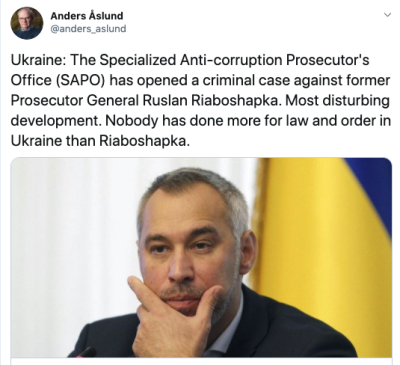 SAPO is led by Nazar Kholodnitsky, who has been accused of corruption and is reportedly close to Kolomoisky.

The move followed the Rada's approval of the resignation of the nation's reform-minded PM Oleksiy Honcharuk. On March 4, the motion was supported by 353 lawmakers. The move followed weeks of controversial reports about the possible dismissal of Honcharuk against a background of his deteriorating relations with Zelenskiy.

The SAPO carries out the prosecutions in parallel with the General Prosecutor’s Office, but is also entirely independent from the government’s control. It is part of a triumvirate that also includes the National Anti-Corruption Bureau of Ukraine (NABU) that carries out investigations, also independent from government control, and the Anti-Corruption Court (ACC) that can hear the cases.

The three bodies were set up at the International Monetary Fund's (IMF) insistence as one of the pre-conditions for granting a new IMF Extended Fund Facility (EFF) facility.

Former President Petro Poroshenko bitterly resisted the establishment of the ACC, which was only forced on him last year. The court was finally established last autumn and handed down its first ruling in November, after Volodymyr Zelenskiy took over as president.

NABU has also been under attack, as Rada deputies associated with Kolomoisky introduced legislation giving the government the power to dismiss the head of the service last month. The IMF sent the head of the presidential administration a letter making it clear that if the laws passed then the new EFF facility would be in danger of not being approved.

Likewise, the management of the National Bank of Ukraine (NBU) has been under attack as courts seek to curb its powers as well. The NBU has been on a campaign to ensure that Kolomoisky is blocked from retaking control of PrivatBank, which was nationalised in 2016 after it was found to have a $5.5bn hole in its balance sheet. A new so-called “anti-Kolomoisky” banking law that bars any owner of any bank that was nationalised from re-taking control of that bank is currently in the Rada and looks like it will be approved this month.

Kolomoisky called the anti-banking law “anti-Ukrainian” and has denied trying to sabotage the law’s progress. After the law was passed in the first reading, Rada deputies associated with Kolomoisky introduced over 16,000 amendments to the law ahead of its second reading that would have taken over five months to debate if the Rada had not subsequently passed a new fast-track procedure to deal with the amendments in bulk.

Kolomoisky has been motivated to retake control over PrivatBank to stop the legal cases the now state-owned bank has been bringing against him. PrivatBank has already won a ruling in London where the courts ruled he was guilty of blatant money laundering and froze $2bn of his assets. PrivatBank also launched a case in Cyprus against Kolomoisky claiming $5.5bn in damages.

The prosecutor's office said the NABU had said it would conduct a pre-trial investigation into the accusations against Riaboshapka.

In a comment on LB.ua, Riaboshapka said he had learnt about the criminal case a few days before. "I know as much as you know. That there was a court decision and SAPO was obliged to open the case. At first they refused, but later they were ordered by the court. This is a routine procedure," he said.

Riaboshapka also said he had not seen a statement by a former prosecutor of the Prosecutor General's Office, upon which the proceedings were opened.

When asked about his whereabouts, Riaboshapka said he was outside Ukraine, with his family in Strasbourg (France).