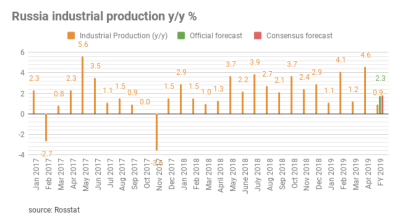 In May Russian industrial output slowed to 0.9% year-on-year from 4.6% y/y posted in April, according to Rosstat state statistics agency. Industry in the reporting month underperformed analysts’ consensus expectation of 1.4% growth.

As analysed by bne IntelliNews, the Russian economy is stagnating in the beginning of 2019 and Russian President Vladimir Putin’s plan to revitalise it with the 12 national projects is off to a very slow start. Weak performance in the first quarter already led to an across-the-board downwards revision of Russia's short-term outlook.

After April's industrial output report, Rosstat also came under fire due to publishing miscalculated date and revising the numbers shortly after.

In May, "weaker output did not surprise as last month in Russia there were two working days less than a year ago. This pushed production in the manufacturing industry down to -1% y/y from 4.7% in April; mining output also slowed to 2.8% y/y (v 4.2%) while utilities countered the trend and accelerated to 1.8% y/y (v 1%) on higher electricity output," BCS Global Markets commented on June 19.

Many segments of industry have posted y/y declines, including dairy and milk, clothing and footwear, oil refinery, chemicals, construction materials, electronics and cars, while the production of oil and gas, meats, metals, locomotives and rail cars posted y/y increase in May.

BCS GM believes that June "should prove to be a better month for growth but annual outlook still looks modest," while reiterating the 2019 estimate for industrial production at 2.1% y/y. The seasonally-adjusted slow-down of industrial output in May could "point to continued moderation in the economy," the analysts believe.