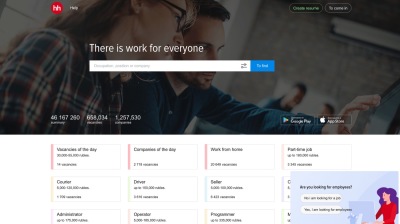 Online recruitment platform HeadHunter has sealed its position as a $1bn tech company after a new multi-million dollar share deal confirmed the company’s soaring valuation
By EWDN in Moscow July 31, 2020

The new deal will see US investment giant Goldman Sachs sell a 9.9% stake for $101mn, thus valuing Headhunter at just over $1bn — a rise in the firm’s valuation of more than $300mn over the last year.

Russian news outlet RBC reported Goldman Sachs will retain a 14.9% stake in Headhunter, which is held in the form of American Depositary Shares (ADS). The deal valued each ADS at $20.25 — up more than 50% from their value at Headhunter’s initial public offering (IPO) in May 2019, when Headhunter became the first Russian-born firm to go for a US IPO since the imposition of sanctions following the annexation of Crimea.

From the early days of the Russian Internet

HeadHunter was founded in 2000 by Russian businessmen Mikhail Frolkin and Yuriy Virovits under the name ‘National Job Club’ (it was renamed into HeadHunter in 2003.) The founders invested about $550,000 in their startup.

In 2016, HeadHunter was sold by Mail.ru Group to a consortium of investors led by Elbrus Capital for about $140mn. Goldman Sachs was said to be among the new shareholders.

In February 2019, HeadHunter acquired a 25% stake in Skillaz, a developer of advanced recruitment solutions valued around $15mn at that time.

The coronavirus pandemic has hit revenues at the recruitment giant, but also helped it pull away from rivals SuperJob and Rabota.Ru, which have suffered more, said Ivan Kim, telecommunications analyst at VTB Capital. Russia’s upcoming technology tax shakeup could also benefit Headhunter, if a VAT exemption its rivals currently benefit from is cancelled from next year.