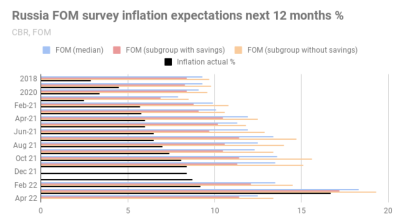 Fast action by the CBR after extreme sanctions were imposed in March has contained inflation and prevented a ruble meltdown. As the population's fears recede their inflation expectations are falling. / bne IntelliNews
By Ben Aris in Berlin May 21, 2022

The inflation expectations of the Russian population fell 6pp in March to 12.5%, as consumers feel the relief of the rapid stabilisation of the economy thanks to the fast action of the Central Bank of Russia (CBR) responding to the shock of extreme Western sanctions imposed that month.

The CBR was worried that inflation expectations would become unanchored and drive prices higher after the ruble collapsed following the sanctions onslaught and prices spiked as Russia’s trade with the world was largely closed down in a matter of weeks.

Over January-March, the nominal exchange rate of the ruble dropped by roughly 40% against the three main currencies of Russia’s trading partners, feeding uncertainty and inflation.

However, the CBR acted very quickly imposing drastic capital controls, mandatory conversion of exporters' dollar earnings and a ban on bank withdrawals that rapidly brought the situation under control. Since then the ruble has appreciated to pre-war levels. Having touched RUB133 to the dollar from around RUB80 in February the ruble has since appreciated to trade at a robust RUB61.7 to the dollar as of the end of trading on May 20.

Likewise, the CBR imposed a massive rate hike to 20% from 9.5% a few days after the war started on February 24 to protect the currency and head off a spike in inflation, which seems to have been very effective. Inflation spiked to over 20% in March, as measured by annualised weekly terms but has since dropped back to 16.7% in March, according to the latest data.

Having headed off the worst of the train wreck the CBR cut the prime rate back to 14% at the end of April, saying that it had quelled the worst of the inflationary pressure that followed on from another cut to 17% at the start of the same month after CBR Governor Elvira Nabiullina successfully soft-landed the ruble from its spike.

However, none of this matters to the long-suffering population that take their inflation expectations from the price changes of the things that they buy most often – and that is mostly food, where the prices have been in double digits this spring.

Government campaigning and the visible strong appreciation of the ruble, which is largely artificial, according to analysts, due to the capital controls that allow for central bank manipulation of the rate, have worked to calm consumers' fears, as the effect of the sanctions has yet to make itself visible at street level.

The price rise expectations for the coming 12 months amongst the poorest in Russia soared to 19.3% in March; this segment of society is most exposed to jumps in food prices, but these dropped again to 13.4% in April. The median assessment of inflation expectations of the population for the year ahead in April 2022 was 12.5%, having decreased by almost 6pp compared with the results of the March survey carried out every month for the CBR by the Public Opinion Foundation (FOM).

That is good news for the regulator, as expectation of accelerating inflation is itself inflationary and the public’s expectations are always higher than the underlying core inflation rate, due to the narrower basket of goods consumers buy. The impact of the war in Ukraine on international food prices has only exacerbated an already dire situation as grain prices soar to new all-time highs.

Respondents to the FOM survey said their lower expectations were due to the fact that price increases anticipated a month earlier had already materialised. In addition, the respondents referred to the continued positive expectations regarding the country's economic prospects, as well as the return of the ruble exchange rate to the level of the first weeks of the year.

At the same time, the consumer sentiment index rose in April and almost returned to the February level. This was influenced by the growth of respondents' optimism regarding the prospects for their personal financial situation and economic conditions in the country.

Price expectations of enterprises for the next three months decreased in April in all areas of activity as well. This was the result of an actual reduction in demand, expectations of its further fall, the strengthening of the ruble, as well as a decrease in the cost of motor fuel. Nevertheless, they remained close to the all-time highs of the entire history of observations starting in January 2000, the CBR reports. The average growth rate of prices anticipated by enterprises in the next three months was 18.0% in annual terms, and in the retail trade an even higher 28.8%, FOM found.

The CBR survey also takes into account the forecasts from the professional economists that work for the likes of Bloomberg, Interfax and other respected independent organisations. In April, professional analysts' inflation forecasts rose again for the end of 2022 to reach 22%, up 2pp on the March guess, while for 2023 and 2024 analysts expect inflation to slow to 7.6% and 5% respectively.

“The Russian economy is entering a phase of large-scale structural adjustment that will be accompanied by a temporary period of elevated inflation, mainly related to the adjustment of relative prices for a wide range of goods and services. The monetary policy pursued by the Bank of Russia will create conditions for the gradual adaptation of the economy to new conditions and the return of annual inflation to 4% in 2024,” the CBR said in the survey notes.

EWDN: How Russian game developers are hit by the shockwave of war

EWDN: How Russian game developers are hit by the shockwave of war
Russia denies defaulting on $100mn bond coupon payment
Ukraine's Zelenskiy calls on the US to recognise Russia as a state sponsor of terrorism

IMF says war in Ukraine, inflation and energy crisis pose challenges to Serbia’s economy
17 hours ago
Poland’s unemployment rate falls to lowest point since 1990
1 day ago
Hungary’s jobless rate inches down to 3.5% in May
4 days ago
Polish retail sales growth eases to 8.2% y/y in May
5 days ago
Ruble rises to seven-year high, best performing currency in the world
6 days ago