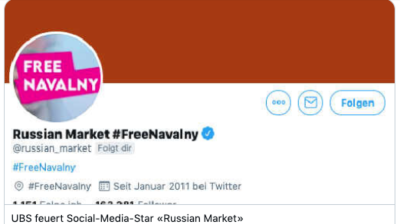 One of twitter’s most prominent commentators on Russia @russian_market was sacked by UBS for openly supporting jailed anti-corruption blogger and opposition activist Alexei Navalny and calling for his release, according to reports in the Swiss press and cited by Kremlin critic Bill Browder.

All that is known is that he was based in Switzerland and the Bloomberg screenshots he posted and his intimate knowledge of the financial markets also made it clear that he worked for a bank.

However, invitations to speak at conferences or appear on Bloomberg, publically made by senior Bloomberg correspondents, were all politely refused.

@russian_market was widely followed by most of the business reporters covering Russia and struck an unusual middle ground being of pro-business and finance but mutedly critical of Russian President Vladimir Putin and the Russian government.

What brought him down was a change in his twitter avatar from a picture of Putin crowned by a circle of flaming blue gas to a banner saying “Free Navalny” and hashtag saying the same.

Big international companies with significant interests in Russia have moved in the last week to gag their employees from openly supporting anti-corruption blogger and opposition activist Alexei Navalny, who was arrested on January 17 on his return to Russia from Germany and who successfully called for nationwide demonstrations on January 23.

The Moscow office of leading US consultancy McKinsey & Company banned its staff from attending the “illegal” protest in the capital in support of Kremlin critic Navalny and warned them against voicing online support, according to an email sent to McKinsey personnel seen by The Moscow Times.

While the demonstrations were illegal, as Team Navalny had not sought permission to hold the rallies, the gag order on McKinsey’s employees not to post on social media about the protests or comment on Navalny’s arrest was an encroachment on their freedom of expression rights, say many commentators.

@russian_market finds himself in the same position, but as twitter feeds have become an essential source of information and views, and are now incorporated into the Bloomberg terminals, banks in particularly have become more sensitive to what is posted there by their staff and the line has become blurred.

Both McKinsey and UBS have significant business in Russia they don't want to endanger.