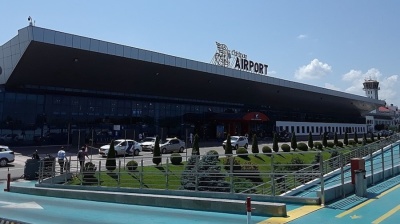 Russian billionaire Andrei Goncearenko has announced that he is ready to sell the shares he indirectly holds in Avia Invest, the company that manages Chisinau International Airport under a 49-year concession contract.

Goncearenko said his decision was aimed at allowing the Moldovan authorities go ahead with their newly announced plans to develop an integrated airport management company aimed at fostering the development of other airports in the country beside the one in Chisinau, deschide.md said quoting an official release sent by Goncearenko.

"Until the divestment of the shares, all the existing obligations toward the authorities and the people of the Republic of Moldova will be fulfilled," announced Goncearenko Radio Free Europe reported quoting the TV8 channel.

Avia Invest changed its owner repeatedly last year, amid the political turmoil in Moldova. Financier Nat Rothschild’s investment vehicle took over the Cyprus-based owner of Avia Invest after the Democratic Party led by businessman and politician Vlad Plahotniuc lost power in July. However, Rothschild gave up the investment after the authorities launched an investigation into the original concession contract.

Goncearenko then purchased the Cyprus-based company in December after the removal of the pro-EU government led by Maia Sandu, when President Igor Dodon appointed his adviser Ion Chicu as prime minister.

The reason behind Goncearenko’s decision to step away from Chisinau International Airport is not known, but speculation is swirling in the Moldovan media.

In related news, Igor Ceaika, a Russian businessman doing business with the president's brother, has recently stepped up his presence in Moldova by taking over two TV channels.

The Moldovan government recently announced a bill to merge the three separate state-owned companies with activity in airport management including a company named Chisinau International Airport (AIC), but this seems to have little to do with Goncearenko's decision. AIC has not been managing Chisinau airport since the country’s main airport came under the management of Avia Invest after the signing of a concession contract. The merger of the three state-owned airport companies should have no legal effect on the concession contract.

Another reason for the Russian businessman to abandon Chisinau Airport is that the Moldovan authorities took steps to cancel the concession contract after the Democrats lost power in July. But the actions in court are dragging on amid complicated procedures that seem to reflect a political struggle among various groups. A certain inertia within the judiciary system has possibly complicated the authorities’ attempts to have the concession contract canceled.

Local media have revealed information indicating that the group headed by Plahotniuc, with businessman Ilan Shor as the most prominent player until his indictment in the $1bn bank frauds scandal (both Plahotniuc and Shor have left the country and arrest warrants have been issued for them), has never lost influence at Chisinau Airport.

There are also claims in the Moldovan media that both Rothschild and Goncearenko were linked to Plahotniuc, either as proxies or business partners.

Plahotniuc met Rothschild through their common partner, Ukraine's former president Petro Poroshenko, the head of Moldovan NGO watchdog.md, Sergiu Tofilat, claims. The transfer of the airport to Rothschild's portfolio was allegedly aimed at protecting the final beneficiary, namely Plahotniuc. Separately, an investigation by Rise Moldova revealed the connections between Goncearenko and the governments informally led by Plahotniuc.

Another possible explanation for the Russian businessman’s decision to give up Chisinau airport was provided by Moldovan businessman and politician Renato Usatii.

Usatii is a controversial figure who has been investigated for bank fraud (though remained free to run in Moldova’s local elections and be re-elected as the mayor of Moldova’s second biggest city) and involved in fierce political conflicts, yet his claims, often made via Facebook, have been repeatedly confirmed, such as in the case of Plahotniuc’s double identity, recently confirmed by the Moldovan authorities.

Usatii claimed in a live Facebook post that Dodon, in control of the executive since November, simply asked Goncearenko pay €50mn for the authorities to abandon their attempt to regain full control over Chisinau airport by cancelling the concession contract in court. Dodon was reportedly supported by influential people in Moscow who pressed Goncearenko as well. Goncearenko has denied he was asked for a bribe by Dodon. But even if not true, Usatii's claims are likely to be backed up by Dodon's enemies who are already accusing the Moldovan president of aiming to gain economic dominance in Moldova by capitalising on his political control of the country.