Russian forces in Donbas push Ukraine troops to the limit 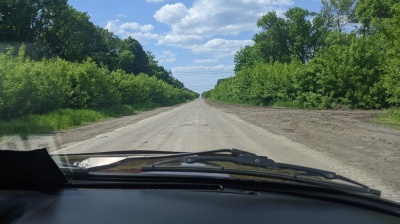 The one remaining road used by the defenders of Lysychansk and Severodonetsk, as Moscow makes steady progress in Donbas. / Neil Hauer
By Neil Hauer southeast of Bakhmut May 30, 2022

Russia’s initial invasion of Ukraine was a story of blunders. From failing in grandiose goals to losing thousands of vehicles in what military analysts called an ‘absurdly bad plan’, Russian forces ended the war’s first stage with a humiliating pullout from Kyiv and northern Ukraine.

That narrative appears to be shifting. After refocusing and massing forces on more limited, feasible goals, Moscow is now making steady progress in Donbas – pushing back Ukrainian forces there while taking advantage of Russia’s substantial edge in firepower.

The first break came on May 18. That day, Russian troops advanced to within several kilometres of the road leading from the city of Bakhmut to Lysychansk and Severodonetsk, the final piece of Luhansk oblast still in Ukrainian hands. A few days later and they had cut the road entirely, blocking the primary supply route to the nearly pocketed defenders holed up in the urban agglomeration. Some reports indicated that Ukrainian counterattacks pushed the Russians off the road itself, but none dispute that the artery is now under direct Russian fire at the least, making any usage a near-suicide run at best. The defenders of Lysychansk and Severodonetsk are now forced to use the one remaining road, through the town of Siversk – under heavy shelling itself from the opposite side of the Seversky Donets river.

Meanwhile, the Russian offensive on Bakhmut itself grinds on.

The advance has made other Ukrainian positions untenable. On May 25, Ukrainian forces pulled out of the town of Svitlodarsk, which until then constituted the south-eastern anchor of their foothold in Donbas.

Further up the road, about 15 km southeast of Bakhmut, a company of Ukrainian Territorial Defence fighters were taking positions along the side of the road.

“We couldn’t hold them there [anymore],” says Yuri, 58, the unit’s commander. “Our guys had to pull back.” Yuri and his unit were not in Svitlodarsk themselves, but witnessed the withdrawal.

He gestures to a bridge just down the road.

“Right there, the Russians are already shelling, coming up behind us,” Yuri says. “They have snipers covering the road there,” he adds.

From the scene itself, it’s clear that heavy fighting is taking place here.

Constant artillery fire thunders in the near distance, with Ukrainian heavy mortars just to the south the source of the largest bangs. The road itself is lined with trees on both sides, providing some element of cover – both for the soldiers and for the Ukrainian vehicles concealed beneath. To the north of the treeline is nothing but open fields, a straight shot to the fighting itself.

For Yuri and his men, this is still a reprieve.

“We are on the second line here, just relaxing,” he says with a smile that belies the difficulty of the situation. “We have been on this front for 40 days. We need to rotate back sometimes – we are not machines, after all,” Yuri says.

The rotations continue regularly. Over the next half hour, three different SUVs approach, speeding as fast as possible down the road to reach the 50-odd soldiers encamped along the sides. They load up with half a dozen extra men each, and speed back off, rushing these reinforcements to the frontline.

There are conflicting reports on where exactly the frontline is. Yuri says it’s some way off – “about 10 kilometres” in his estimation. Another soldier, one who has just come from Svitlodarsk, gives another opinion: just two.

The fluidity is explained in part by Russian reconnaissance in force in numerous directions, probing for a weakness to exploit.

“The enemy is trying to move forward right now,” Yuri says. “They are trying in many directions, to find a weak spot.”

Despite the tense situation, their basic provisions are enough.

“Our food supply is good,” Yuri says. “It’s a war, it’s not restaurant conditions, but it’s enough. The main problem is water – we have so little sometimes that we can’t even think about washing our faces,” he says.

“We have American MREs,” says Artyom, another officer, jumping in. “Very good!”

Their main problem is something much more difficult to address.

“We need heavy weapons,” says Yuri. “This is a war of heavy equipment and armoured vehicles, and the Russians simply have far more than us – and more modern, too. Javelins are not enough. We need howitzers and tanks,” he says.

Shortly thereafter, a Ukrainian T-64 main battle tank revs up its engine in the treeline nearby. It trundles onto the road, heading in the direction of the Russian advance from Svitlodarsk.

“See? Look how old our equipment is,” says Yuri.

The amount of firepower hitting their positions further drives the disparity home.

“We were on the frontline last week,” Artyom says. “Every day, there are [Russian] helicopters. One came at us, just 600 metres away,” he says.

After weeks of intense combat, the casualties are adding up. “We simply don’t have the numbers to run and attack them,” says Yuri, not flinching from the boom of more mortars nearby. “We don’t have the [men] anymore.”

Other reports bear this out. A recent story by the Washington Post featured several soldiers from further northeast on the Donbas front who had recently deserted their posts, feeling abandoned by their high command. They described dire conditions, such as being left with one potato each per day to eat and having only four RPGs for a 15-man unit facing down Russian armour. “We are being sent to a certain death,” said another volunteer fighter in Severodonetsk, whose entire unit was protesting about their situation.

Meanwhile, Russian troops continue to make gains. On May 26, they captured the city of Lyman, storming it after weeks of reducing Ukrainian forces there with artillery fire.

Ukrainian officials have also made grim statements in recent weeks. Ukrainian President Volodymyr Zelensky claimed on May 23 that ‘between 50 and 100’ Ukrainian soldiers were being killed every day. His adviser went further, saying that Lysychansk and Severodonetsk were becoming ‘a new Mariupol’ and that Ukraine’s armed forces are ‘barely afloat.’ There are persistent reports of Ukraine moving heavy reinforcements into the area in order to throw back the Russian advance, but they will be hard pressed to do so. Slowly but steadily, Moscow’s troops are grinding forward in Donbas.

For the beleaguered soldiers along the roadside near Bakhmut, this is something they know very well.

The birth of a Kazakh banking empire: ATF Bank
15 hours ago
CEPR's action plan for Ukraine's wartime economy
1 day ago
Missiles or sabotage: What caused the explosion at the Russian airbase in Crimea?
4 days ago
Population decline to take Emerging Europe back to the early 20th century
4 days ago
Czech government remains colour blind on green issues
4 days ago