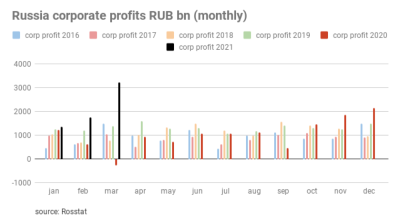 Russian corporates made three times more money in March than in any previous March for the last five years as they extended gains in the first two months of this year.
By bne IntelliNews May 30, 2021

Russian corporate profits extended their gains from the first two months of this year and made three times as much money in March as in any previous March since 2016, according to the latest RosStat figures.

The economy is just starting to recover, but GDP still contracted in the first two months of this year before expanding by a modest 0.5% in March. The Ministry of Economy reported that the economy contracted by a revised 1.1% in the first quarter.

However, at the microeconomic level things are going much faster and companies have been basking in the glow of the release of a year’s worth of pent-up demand.

Corporate profits in March soared by RUB3.2 trillion ($44.1bn) after losing RUB277bn the year before – the only month in 2020 where companies made an aggregate loss. The result was also three times higher or more than in any March for the last five years.

On a cumulative basis Russian companies have made a profit of RUB4.9 trillion, double the profits of any year in the last five, except 2019 when companies made RUB3.9 trillion.

The excellent financial performance of Russian corporates goes someway to explaining the sudden surge in business confidence, which has just turned positive for the first time in eight years and only the second time ever.

s from bne IntelliNews Russia monthly country report. Sign up to receive the report to your inbox each month, which covers the slow-moving macro- and micro-economic trends, the major political news and a round-up of the main sectors and corporate news. First month is free and you can unsubscribe at any time.