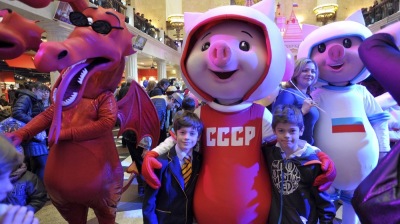 Real incomes in Russia may be stagnating but people are still spending on their kids and most of the gains came from increasing customer numbers, up by 7.25 in the quarter, VTB Capital (VTBC) said in a note.

“The company’s core, Russian market demonstrated 6.6% LFL growth, boosted by the national holidays in Russia (23 February and 8 March) and the maturity of stores opened in 2017-18," Maria Kolbina, a retail analyst with VBTC, said. “These results provide upside risks to our more conservative forecast for 2019F of 11% y/y growth and could potentially serve as a foothold for better growth prospects.”

The company continues to expand on the back of its iconic brand, well known to everyone in the former Soviet Union. The company opened five outlets in the first quarter, bringing its total store base to 748 locations, and 769,000 sqm of selling space.

Detsky Mir also entered the Belarusian market this year as an emerging middle class makes it more appealing to retailers, as bne IntelliNews has reported with “The long march of Belarusian retail” in September 2018. Detsky Mir opened its first three stores in the first quarter and confirmed plans to open at least 80 more Detsky Mir stores in 2019, including 10 more in Belarus. As bne IntelliNews has already reported, Detsky Mir plans to open 30-50 new stores in Belarus in the next three to four years.

The real disposable money income of Belarusians rose by 8.1% y/y in January-October 2018, the National Statistics Committee of Belarus reported on December 18, and is expected to continue rising. The domestic supermarket chain Eurotorg (aka Euroopt) twice tried to IPO in London last year and is expected to try again this year.

According to the company, this growth can be attributed to:

The store base reached 748 locations (five net openings in the quarter), with the number of openings corresponding to the previous year, as the first quarter is usually slow in terms of store roll-out, with the majority of stores being opened at the end of the year.

The new stores in Belarus have a sales area of 3,000 sqm and the company plans the launch of an online store in Kazakhstan in 2019, along with an in-store pick-up service.

A classic Russian retail investment, Detsky Mir’s shares have long been a darling of investors and are up 5% YTD, although that is well behind the RTS gain of 17% YTD and the financial sector stocks that are up over 21% as of April 15, making it the best performing sector. All-in-all Russia’s stock market is now the second best performing in the world after China’s.

“The company delivers one of the fastest growth rates in our coverage universe and its dividend profile is the most impressive, with our dividend yield forecast at 10.6%,” Kolbina adds.