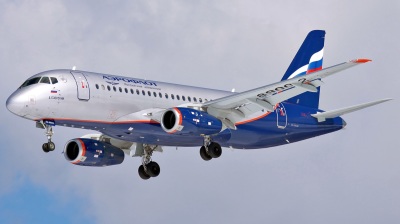 Investors are interested in Aeroflot's stock again and its price has surged in the last month
By bne IntelliNews January 23, 2020

Analysts are increasingly keen on the stocks of Russian national air carrier Aeroflot after it had a terrible 2019.

The company is seen as recovering and its share price has surged in the first weeks of 2020, according to the special report by VTB Capital released on January 21, arguing that "after 2.5 years of underperformance, Aeroflot seems to be shaping up for a change."

As reported by bne IntelliNews, Aeroflot managed to contain the losses of 2018 on high fuel costs and had its investment case improve in both structural and fundamental terms, with a brighter outlook on regulatory and cost relief in 2019-2020, as well as an expected resumption of dividend payments to investors.

Prior to the fall in the companies shares in 2019 Aeroflot was an investors darling for several years on the back of increased traffic volumes and growing profitability.

Now the government’s response to the company’s problems of rising fuel and labour costs have given the carrier a boost. The airline got a further bump at the end of 2019 when the government support package for airlines was approved by Kremlin. At the beginning of 2020 the sentiment on Aeroflot was also supported by unconfirmed reports that Aeroflot could set up a new state-controlled airline for the Far East region.

The company's Ebitda could further expand by 15% in 2021, VTBC estimates. The contribution of the most successful European low cost carrier, Pobeda (+59% EBITDA growth in 2019), is to triple between 2019 and 2022, to account for 1/5 of the Aeroflot Group, VTBC forecasts.

In 2019 Aeroflot had to resist regulatory pressure from the Federal Antimonopoly Service (FAS) to spin Pobeda off as an independent carrier to help bring prices on domestic flights down.

VTB Capital estimates that on a 2022 forecasted Enterprise Value to Ebitda of 7x, Pobeda’s market capitalisation might exceed RUB60bn, half of Aeroflot’s current market cap.

VTB Capital thus reiterated the Buy recommendation on the name, while increasing the 12-month target price from RUB130 to RUB150 per share, implying a 34% estimated total return. The company's 4Q19 financial report is seen as next strong catalyst.

To remind, in the end of 2019 Aeroflot confirmed its ambitious guidance for annual passenger traffic growth of a solid 6.5% over 2019-23 for the Russian market thanks to the development of regional routes, better infrastructure and a boost from low-cost carriers. 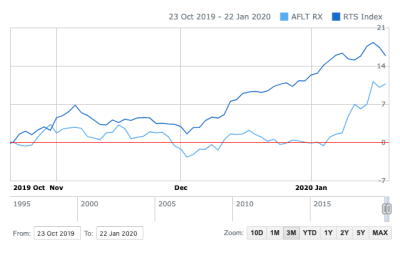