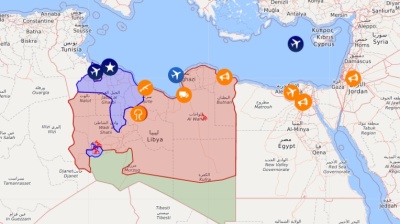 Russia and Turkey have agreed to continue efforts to achieve a long-term and sustainable ceasefire in Libya, the Russian foreign ministry said in a July 22 statement.

Russia, as well as countries including Egypt and the UAE, backs eastern Libya commander Khalifa Haftar who heads the self-styled Libyan National Army (LNA). It has in recent weeks been pushed back by the Turkey-backed forces of the Tripoli-based Government of National Accord (GNA), which enjoys UN recognition. France has been heavily critical of fellow Nato member Turkey’s role in the ongoing Libyan Civil War, with some analysts pointing out one outcome could eventually mean Turkish and Russian air bases staring across the Mediterranean at France, Italy and other European Union countries.

Foreign powers have poured weapons and fighters into Libya in violation of an arms embargo and Russia is believed to have flown fighter jets, with no markings, to an air base on LNA territory.

There are fears of a big battle erupting for control of the central Libyan city of Sirte and the nearby “oil crescent”. The GNA would like to recapture Sirte partly because it is the gateway to Libya’s oil-exporting ports. Sisi has declared the Sirte front-line a red line for Egypt.

Egyptian officials often refer to armed groups in Tripoli and western Libya as “militias” and see Haftar as leading a “counter-terrorism force.”

Turkey has described Cairo’s support for the LNA as “illegal” under international law.

Sisi warned last week that Egypt would not stand idle if there was a threat to national security in Egypt from the situation with its western neighbour, Libya.

Reuters reported that Egyptian state TV has in the past week run banners on screen stating: “Egypt and Libya, one people, one fate.”

The last time Egypt sent ground troops abroad for combat was in 1991 in Kuwait as part of a US-led coalition to drive out Iraqi troops.

The US position on Libya is unclear. There have been some reports of Turkish President Recep Tayyip Erdogan claiming US President Donald Trump supports Turkey’s efforts in Libya, but shortly before the vote of the Egyptian parliament, Sisi and Trump spoke by phone.

“The two leaders affirmed the need for immediate de-escalation in Libya, including through a ceasefire and progress on economic and political negotiations,” the White House said in a subsequent statement.

Trump also told French President Emmanuel Macron by phone that the conflict “has been exacerbated by the presence of foreign forces and arms,” the White House added.

There have also been reports of Egypt this week lobbying Iraq to strengthen the alliance against Turkish military adventurism.

The only significant ally of Turkey in the Middle East is Qatar, where it has a military base. Turkey has served as a refuge for the Muslim Brotherhood which Egypt regards as a terrorist organisation.

Turkcell denies any affiliation with $1.6bn loan in default extended by Ziraat Bank to Virgin Islands company
LONG READ: The oligarch problem
BEYOND THE BOSPORUS: Let’s tentatively pencil in a date for Turkey’s hot money outflow