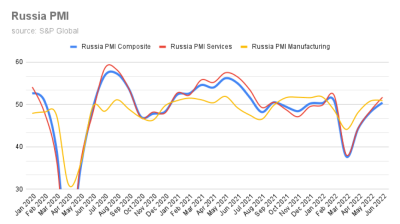 The start of the war with Ukraine in March was a shock, but the rapid return to stability, thanks to the central bank's fast action, has bolstered confidence and the services sector is growing again in June. / wiki
By bne IntelliNews July 5, 2022

Russia registered a return to growth in its service sector in June, according to the latest S&P Global Service Manager’s Index (PMI) data, recording 51.7 in June, up from 48.5 in May (chart), to signal the first expansion in business activity across the Russian service sector for four months.

The rate of growth was only marginal overall and below the series average, but the upturn was reportedly linked to greater client demand and a renewed rise in new business, S&P reports.

Output rose marginally, as new orders increased for the first time in nine months and at the fastest pace for a year, according to S&P. Client demand was supported by domestic customers, with new export orders continuing to contract.

At the same time, output expectations regarding the year-ahead outlook strengthened to their highest since February. Companies continued to reduce their workforce numbers, albeit at a slower pace, amid a further fall in backlogs of work.

The services result comes on the back of a mild growth in the manufacturing PMI which was growing mildly in June, posting 50.9, in line with 50.8 registered in May.

The combined results show Russia’s economy is stabilising after the initial shock of Western sanctions connected to the war in Ukraine start to wear off. RosStat released mildly positive economic growth numbers at the end of June, which paint a mixed picture. There was strong growth in things like raw material extraction, but other sectors such as automotive have collapsed due to the lack of imported inputs.

All in all, RosStat’s May results were good enough for Capital Economics to reassess its forecast for an economic contraction in the first quarter down from -15% to -10%. The torrent of inbound petrodollars is proving to be a cushion against a worse fall in production due to the extreme sanctions imposed by the West.

Taken together, the S&P Global Composite PMI Output Index was also pushed back into the black, posting 50.4 in June, up from a contraction with 48.2 in May.

However, several problems remain. Inflation remains very high, despite the fact that the Central Bank of Russia (CBR) believes inflationary pressures are beginning to recede.

Russian service sector firms said input costs continue to climb in June due to higher imported input prices and an extremely strong ruble that is hovering around RUB50 to the dollar – its strongest since 2015.

Some companies also stated that hikes in labour costs to retain employees had pushed expenses up. Although among the steepest on record, the rate of cost inflation eased to the softest since February, says S&P. As a result, firms passed the increased costs onto customers. The rate of charge inflation eased notably from May and was the softest since February 2021, in keeping with the CBR’s estimation that inflationary pressures are falling.

The CBR put through an emergency hike taking the prime rate to 20% in the days after the Ukrainian war started at the end of February. However, its fast action rapidly stabilised the situation and the regulator has cut rates four times since bringing the prime rate back down to the pre-war level of 9.5% on June 10. More rate cuts are expected and the CBR says it will return to its target level of 4% for inflation in 2024.

While they are visible to ordinary Russians, mainly via the increase in the cost of living, the sanctions have yet to severely affect the daily life of most of the population, which is keeping demand up. Labour is one bright spot where unemployment levels set a new post-Soviet low of 3.9% in May, according to RosStat.

While many economists are expecting the situation to deteriorate as the longer-term negative effects of sanctions start to take their toll, for the meantime the PMI indices paint a picture of relative calm.

“The June data indicated the first increase in new orders at Russian service providers since September 2021. Firms often attributed the upturn to demand from new and existing domestic customers. The uptick in new business was solid overall and broadly in line with the series trend, albeit coming off a low base after a protracted downturn,” S&P said in a note.

One of the areas where sanctions have made the most difference is exports, which have collapsed. New export orders fell further at the end of the second quarter, albeit at a slightly softer pace, says S&P. “The rate of contraction was marked overall and among the sharpest on record, as firms stated that lower new business from abroad reflected the impact of sanctions on foreign client demand,” S&P reports.

Cocooned in a world dominated by state-run propaganda and impressed by the rapid recovery in the value of the ruble against the dollar, after the currency weakened massively in the first week of the war, Russians are backing Putin’s war and optimistic about the outlook.

“The degree of confidence in the outlook for output over the coming year ticked up to the strongest since February and signalled a marked turnaround from the pessimism seen in March and April. Hopes of further rises in new business and client demand underpinned positive sentiment, according to panellists,” S&P reports.

Nevertheless, firms continued to marginally cut their workforce numbers at the end of the second quarter due to voluntary leavers and difficulties retaining staff in the tight labour market.

Still, service providers say they have sufficient capacity to work through incoming new business, as backlogs of work were depleted again in June. The rate of contraction softened notably amid higher new orders, however, to the slowest in the current 17-month sequence of decline.

Austria, Croatia and Serbia were the top sources of foreign direct investment in Bosnia in 2021.

Russian inflation falls again to 14.9% in August, fears of a deflationary spiral grow
3 hours ago
FDI in Bosnia rose by 35% y/y in 2021
5 hours ago
Latvian unemployment rate at 6.6% in 2Q
1 day ago
Polish economy in much sharper downturn than expected, Q2 GDP data show
1 day ago
Russia’s EconMin seen as overly optimistic with another GDP upgrade
1 day ago