Russia’s Watcom shopping index stages recovery in April and May, shopping only 10% below 2019 levels 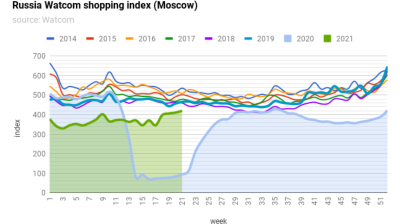 Foot traffic at Moscow's leading shopping malls has recovered to only 10% less than the 2019 levels, the first year of strong growth following the 2014 crisis.
By bne IntelliNews May 25, 2021

Russia’s Watcom shopping index, which measures foot traffic in Moscow’s largest malls, started to show a stronger recovery between the middle of April and the middle of May, and is approaching levels not seen since 2019.

As the chart shows, the index crashed to historical lows at the start of April last year as the country was put on a strict lockdown in week 14 (April 1) and the population was forced to stay at home for much of the early summer.

The year-on-year comparisons with 2020 have been rendered meaningless, but the index has improved dramatically when compared with 2019.

The crisis started at the beginning of March, when Russia refused to renew the so-called OPEC+ oil production cut deal, which led to a collapse in oil prices and a devaluation of the ruble. The start of the pandemic only a few weeks later only compounded these problems dramatically.

The shopping index in the first few crisis-free months of 2021 was still some 20%-25% y/y down from 2019, the first year of strong growth since the last oil price shock in 2014, but shopping in malls has also been losing ground to the rise of online shopping, which is the fastest growing segment of the Russian economy in recent years.

Shopping foot traffic levels this year remained down by a quarter compared to 2019 levels throughout April, but things began to change in week 18 (May 3) at the start of the 10-day-long May Day holidays, when foot traffic jumped to an index score of 397.7, only 14.4% less than the 464.8 seen in the same week in 2019.

Traffic continued to recover the following week as this year’s index score rose above the 400 level for the second time, and stayed there. The index briefly rose to 402 in week 9 (March 1) but fell back below 400 the following week.

The combination of the long holiday in May, the coronacrisis bounce-back and the recent record-breaking hot weather for May in Moscow have contributed to a surge of shoppers headed to the malls.

The improving foot traffic at shopping malls has yet to turn up in the aggregate retail turnover macroeconomic data. Rosstat reported that retail was down 1.6% y/y in the first quarter, and sales remain depressed by the ongoing compression of real incomes. However, the retail numbers for May should receive a boost from the holiday shopping bump and real income decline is anticipated to halt or even reverse in the second quarter as the government starts to roll out RUB400bn ($5.5bn) of extra social spending that Russian President Vladimir Putin promised during his State of the Nation speech earlier this year.

Russia’s companies are also currently enjoying their strongest profits in five years and may start to pass on some of the windfall to staff with pay rises that could restart a modest version of the virtuous circle of pay rises, consumption, profit and investment that drove much of the rapid growth in the noughties boom years.