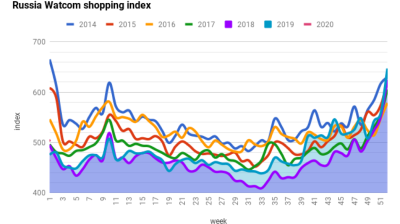 The Watcom shopping index finished 2019 on a high note, putting in its best result in five years after under-performing for almost the whole year.
By Ben Aris in Berlin January 23, 2020

“Consumer activity showed growth for the first time since 2014 in 2019, according to Watcom Shopping Index data. The low dynamics of commercial space commissioning, as well as other factors, contributed to shopping index growth in Moscow in the third quarter by 5.2%. In Russia on the whole it grew by 1.1%, and as a result, for the whole year the whole country was down by 0.7%,” Watcom Group general director Roman Skorokhodov said.

The index is a real-time measurement of the foot traffic in Moscow’s leading shopping malls that makes use of 3D counters.

Skorokhodov says that attitudes have changed and consumers are saving less and have switched to “careful consumption” mode. At the same time, the leading retails are running non-stop promotions, cash-back schemes and have been investing in entertainment in shopping centres to pull the punters in. Trips to the mall probably got a fillip from the unsually cold summer in 2019 as well, speculates Skorokhodov.

“People have become used to the economic situation and started perceiving it as a new reality. They visit shopping centres for leisure and entertainment, but cannot resist if there is an attractive discount, sometimes even spending more than planned,” he said.

Over the last two years the index has been falling steadily and under-performing the earlier years thanks to almost six years of stagnant real income growth.

The index has been further pushed down by the rapid growth of e-commerce as shoppers increasingly order their goods online. E-commerce currently accounts for 4.5% of retail turnover, but is growing at over 20% a year and the share of e-commerce in retail is expected to double in the next three years.

These factors have combined to keep punters away from the stores, but the index shows that shopping in traditional bricks and mortar venues reached a nadir in 2018, but last year showed something of a revival.

While the Watcom index started 2019 at the same level as 2018 – the worst year since the index was founded in 2014 – by the middle of the year the volumes of foot traffic began to improve compared to 2018, although the volumes remained below those of the previous four years.

However, in the last three months of 2019 the volumes of foot traffic took off to match pass holiday shopping binges and were crowned by the highest volumes seen in six years.

Russia’s retail turnover was up 2.3% year on year in November, the last data available, after expanding weakly all year. Consumer demand began to recover in October thanks to the first increase in real incomes of 3.1% in that month, according to Rosstat.

Investors clearly think that the retail sector will continue to improve this year on the back of the large rises in social spending announced by Russian President Vladimir Putin during his state of the nation speech on January 15. Consumer stocks have jumped in value in the first week of the year in anticipation of a promised tripling of social spending this year that should feed through to the bottom line of the major retailers.

In St Petersburg the situation was approximately the same as in Moscow. The 52th week Shopping Index decreased by 2.2% like for like (LFL), but during the first week of 2020 grew by 14.1% LFL.