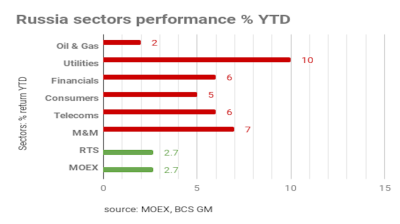 The RTS broke through the important 1,600 mark in the first two weeks of this year, but dropped back below this level on January 22 briefly before recovering to 1,610 following the opening of the market on January 23.

The rally is still being led by utilities, with the shares in the sector up by 10% YTD, says BCS GM, and consumer stocks are also rising, up 5% YTD after putting in a poor year in 2019. Investors are speculating that the large increases in social spending announced in President Vladimir Putin’s state of the nation speech on January 15 will feed through into a good year for retail companies. Indeed, the latest Watcom shopping index bears that optimism out, as foot traffic in Moscow’s largest malls reached a five-year high in the last weeks of 2019. 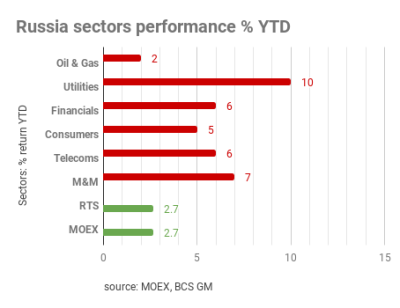 However, in the short term investors were cashing in on the good start to the year.

“Without new cash from ETFs for just three days, the market has given up gains of the past two weeks. Retail is gradually offloading, while new shorts jump 40%. We continue to see risks of a market downturn in the next few weeks,” BCS GM said in a note.

Russia was leading the EMs in the last two weeks in terms of new money flowing into ETF funds, setting a multi-year high. But those inflows have dried up now.

The last week brought no new money, while investors withdrew $6mn from Russia-dedicated ETFs. As a result, combined inflows amounted to $25mn for the week-ending January 21. “The average long position among the most liquid names traded on MOEX declined by 1.3% in the week ending Wednesday. Short positions rose by c40%.” 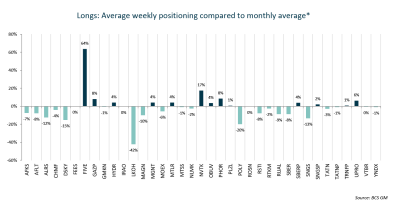