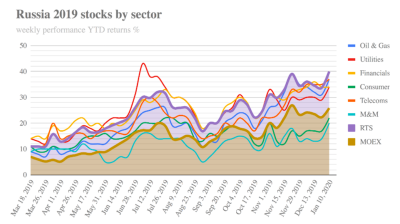 Russia's RTS index is up 6% YTD and analysts expect that the spring rally will get a boost from the recent changes to the government
By Ben Aris in Berlin January 21, 2020

The spring rally that got under way at the start of the new year has received a boost from Russian President Vladimir Putin's proposed constitutional changes and the appointment of a new government, analysts say as both the RTS and Moex Russia index reach new highs.

While political commentators have criticised Putin’s constitutional changes outlined in his state of the nation speech on January 15 as a way for the president to remain in power, market participants have been buoyed.

“Market participants had as a base case scenario that Putin would stay on after 2024 and nothing has changed with that assumption,” BCS Global Markets said in a note last week, referring to the year that Putin is constitutionally required to step down.

The RTS wobbled briefly after Putin’s speech and the subsequent resignation of Russian Prime Minister Dmitry Medvedev and his government, but rapidly recovered after the new prime minister Mikhail Mishustin, the former head of the tax service, was appointed by the end of the same day. 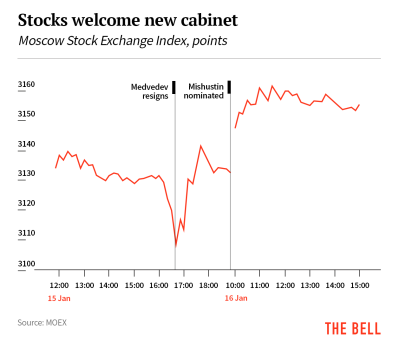 The MOEX Russian index crossed the 3,000 mark at the end of last year for the first time and has since been setting new all-time highs on a daily basis. At the time of writing the ruble-denominated index was at 3,196 as of the market's open on January 21.

Likewise, the dollar-denominated RTS index crossed the 1,500-mark at the end of 2019, definitely breaking out of the 900-1,300 band where it has been stuck for most of the last five years, but increased further at the start of this year to break through the 1,600-mark too – a level last seen seven years ago. The RTS also opened strongly this morning and was at 1,627.37 at the time of writing.

Year to date the RTS has gained 5.9% in the first 20 days of the year and MOEX Russia index is up 5.3% as of January 20. The rally has been led by utilities, up a hansom 13% YTD, which also rallied strongly in 2019 on the back of an ongoing reform of the sector. Metals and mining have also done well, up 10% YTD after a lacklustre performance in 2019. Consumer stocks are also coming back into vogue as both Putin and the new prime minister have emphasised that this year one of the government’s top priorities is to boost incomes. Consumer names had a very poor 2019 due to the pressure of nearly six years of stagnant real income growth. Oil & gas and telecom stocks have improved the least YTD, but were still up 5% as of January 20.

As bne IntelliNews reported, the Russian market usually experiences a seasonal spring rally where it typically returns 18% on average in years where there is no crisis, that runs to shortly before Easter. However, this year analysts speculate the changes to government will boost the spring rally as investors are betting on companies that benefit from the president’s new initiatives that the new prime minister will have to execute.

In related good news, Russia’s gross international reserves (GIR) topped $557bn this week, matching its pre-2008 crisis all-time high. The Central Bank of Russia (CBR) has easily surpassed its $500bn “comfort level” for reserves and has begun to buy gold less, and has even started investing some of its “surplus reserves” in US treasury bonds, after selling down most of its T-bill holdings last spring.

Another change is that Russian equity markets have enjoyed the biggest inflows of foreign funds in the first few weeks amongst the leading emerging markets, whereas usually they receive the least during rallies during recent years. The capital inflow last week reached $480mn, including $150mn into equity funds - a record amount over the last two years, Alfa Bank writes.

Underlying the rally is the belief that Mishustin is a capable administrator and will be effective in making the proposed reforms as well as implanting the 12 national projects. Medvedev was seen as a weak, corrupt and incapable leader, who personifies the politics of stagnation. Mishustin won praise for a radical overhaul of the tax service which boosted the tax take by 20%, while the tax burden increased by only 2%. Moreover, Mishustin is tech-savvy; another of his achievements was to directly connect every single cash register in Russia to the tax office so every single transaction for every single item bought in shops is registered with the tax man. This deep interconnectivity has already led to new business innovations, as the tax office is sharing their information with consumers and tech companies.

Analysts are expecting the rally to continue as more details of the new government appointments are released. They anticpate more competent managers, cut from the same cloth as Mishustin, being appointed.

“The market is eagerly awaiting the announcement of a new government - according to media reports, Andrei Belousov will take the post of first deputy prime minister,” Alfa Bank said in a note, as cited by The Bell.

Presidential aide Belousov is best known for suggesting a super tax on raw material producers to encourage investment into other sectors of the economy, and is a respected economist.

Investors have targeted companies that are likely to benefit from the implementation of the national projects. After getting off to a slow start last year, there was a rush of activity in the final months of the year, when 91.4% of the funds allocated to be spent in 2019 were disbursed by the close of the year. 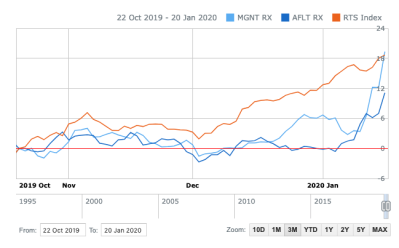 “We preliminarily estimate that the additional social spending announced by President Putin last week will push retail sales growth up by 1 pp and inflation up by 0.2 pp in both 2020 and 2021. Inflation should remain well below 4% in 2020 and will approach 4% in 2021 but stay below the official target,” Anton Stroutchenevski of Sberbank CIB said in a note. “According to preliminary estimates by the Finance Ministry and Accounting Chamber, additional budget spending (i.e. not just social spending) will reach R450-500bn in 2020 and R650bn in 2021.”

Sberbank CIB estimates that consumption could be boosted by RUB250bn in 2020 and RUB300bn-RUB350bn in 2021 that could feed through to an additional real retail sales growth of 0.8pp in 2020 and 0.9-1.0pp in 2021. Moreover, given that annualised inflation is currently running at around 2%, the additional social spending will not overheat the economy, says Sberbank.

"In 2022-23, the additional social spending is set to almost double to more than RUB1tn. However, we expect a minimal impact on inflation, as the increase will be due to the prolongation of the maternity capital programme. The initial plan was to stop the programme at the end of 2021," Sberbank added.

Budget surplus amounted to RUB2tn in 2019, close to 1.9% of GDP. Social spending is set to increase rapidly in the next three years. Budget spending rose 9% to RUB18.2tn in 2019 and was initially planned to reach RUB19.5tn this year. However, President Putin announced additional social spending during his Federal Assembly address to support low income groups and expand the "maternity capital" programme, among other things.

Total budget spending could rise by an additional RUB450bn-500bn in 2020 and RUB650bn next year; the exact spending figures will only become available after the first budget amendments in the spring, reports Sberbank. Over the longer term, increased social spending will require some changes to the budget rule or a revision of other types of expenditures.

Leading names in the metals and mining sector have also seen interest. Over the last week, the shares of aluminium producer Rusal were up by 16%, Magnitogorsk Iron and Steel Works (MMK) by 9%, PGM (platinum group metals) producer Norilsk Nickel by 8.6% and steel producer Severstal and Novolipetsk Metallurgical Kombinat (NLMK) by 4%.

Russia’s leading internet company Yandex also saw a 2% bump after Mishustin praised the company in a speech shortly after his appointment.

While the political changes have given the rally a boost, the main factors driving the market up were already in place, according to Andrei Kochetkov, a leading analyst at Otkritie Broker. The new stock records are primarily down to the deep rate cuts made recently by the CBR on the back of rapidly falling inflation and a recovery in income levels, according to Kochetkov, as cited by The Bell. As bne IntelliNews reported in its new monthly ETF and fund wrap, the Russian market has actually been re-rating over the last two years, but that re-rating has become so broad-based it is now pushing the overall index numbers up.