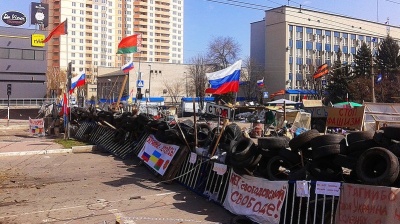 Secessionist barricades in Luhansk in 2014, when the conflict in the Donbas started.
By Sergei Kuznetsov in Kyiv July 18, 2019

In April, Putin signed an order simplifying the procedure for obtaining a Russian passport only for residents of the rebel-controlled Donetsk and Luhansk regions of eastern Ukraine.

In response, Ukraine's then President-elect Volodymyr Zelenskiy declared his readiness to grant Ukrainian citizenship to Russians who suffer from an authoritarian regime. "We will provide Ukrainian citizenship to representatives of all peoples who suffer from authoritarian and corrupt regimes. First of all, to Russians, who today suffer almost more than everyone," he said at the time.

In May, the Ukrainian government said that Kyiv was going to recognise passports issued by Russia to Ukrainian citizens in Donbas as illegal and invalid. "We will make a decision today to determine all passports issued to Ukrainian citizens in our territory as a violation of the rules of law," Prime Minister Volodymyr Groysman said. "These passports will be considered illegal - when crossing the state border and used in the territory of the state. This will be our response to Russia's hybrid action."

The premier added that the cabinet would appeal to other states to declare invalid such "fake" documents as well.

In June, President Putin said in an interview with the Italian newspaper Corriere della Sera that Moscow could improve relations with the Ukrainian leadership if Zelenskiy started direct dialogue with Moscow-backed separatists in Donbas.

Over the past five years Kyiv has refused to negotiate directly with the Donbas separatists sponsored and backed by the Russian leadership owing to the fact that the occupied areas of the Luhansk and Donbas regions are widely considered to be under direct Kremlin control.

On May 21, Zelenskiy said in his inaugural address that "the first task" of the new leadership should be a ceasefire in Donbas.