Russia's industrial output up by 2.9% in August 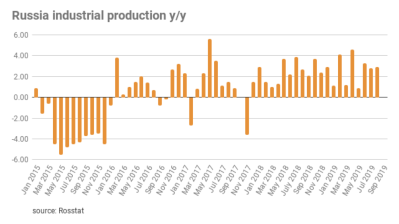 Industrial production in August beats consensus estimates, and "saw the same growth rate as in July driven by the base effect and better performance in food and chemical industries," BCS Global Markets commented on September 17 reiterating full-year industrial output growth at 2.1%.

"In August, sizable increases in output were recorded in the production of meats, cheese, sunflower oil, potatoes, as well as in oil refinery and other chemical products," BCS writes, while noting negative y/y dynamics in the production of cars (-3% y/y) and many electronic items.

Looking forward, BCS reminds that in 2018, Russian industrial production showed softer output in 2H18, thus expecting a favourable base effect for y/y dynamics during most of 2H19. "However, the prime driver for industry – rising domestic demand driven by the implementation of the government’s national projects – has yet to materialize," BCS continues to warn.

As reported by bne IntelliNews, lacklustre economic growth is expected to speed up in 2H19 due to increased government spending on National Projects. However, other analysts previously warned that turnaround in the second half of the year risks not to materialize.

"This could be viewed as a healthy leading indicator for construction activity, which could be picking up in light of rising government infrastructure spending," Sberbank argues. Still the bank notes that the disappointing metals production figure indicates that external demand remains weak.

Most recently, following the slow start of the year, the Ministry of Economic Development has downgraded the economic outlook, expecting GDP growth of 1.3% in 2019.