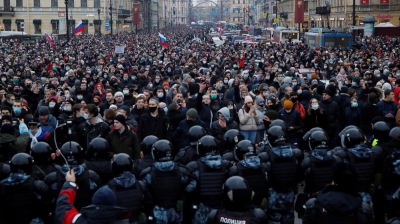 Protesters filled the main streets of St Petersburg as thousands came out to protest against the government.
By Ben Aris in Berlin January 23, 2021

Reuters reported that 40,000 people came out in Moscow alone as of 4pm local time, making these protests by far the largest since 2011 that followed the fixed Duma elections in that year, when over 100,000 Muscovites demonstrated for several days against the results.

One of the biggest crowds this weekend was in St Petersburg, where tens of thousands turned out and filled Nevsky Prospect, the city’s main street.

Police tried to break the crowd up but were seriously out numbered. In images very similar to the clashes between OMON and the Belarusian protesters at the start of their protest in August, protesters broke through police lines, forcing the officers to retreat.

In Moscow the protests were largely peaceful until about 4pm, when the police went on the offensive. They started to close roads and segregate the city to prevent different groups from joining up.

Moscow also saw violent clashes between large crowds and OMON on Tverskaya, the Oxford Street of the Russian capital. Police were out in large numbers, but were outnumbered by the crowd and were also forced to retreat into defensive formations.

Later in the day as the sun went down protesters congregated on Tsetnoi Boulevard, between Red Square and the Garden Ring Road, where buses of OMON arrived and began arresting random protesters in an effort to break up the demonstration.  Over 600 people were arrested in Moscow and similar numbers in St Petersburg.

Protesters threw snowballs at police provoking them to charge the crowd and snatch some protesters, who were led away to paddy wagons. In another clip from fontanka.ru a woman stepped out to ask OMON officers why they had arrested a man they had in custody, only to be brutally kicked in the stomach and knocked to the floor by one of the officers.

“The violence we are seeing is unprecedented,” reported TV Dozhd. “And for the first time we are seeing members of the crowd who are willing to fight back against the police. This is something new.”

The NGO OVD info reported that a total of 1,873 had been arrested around the country as of 6pm local time on January 23.

The foreign ministers of the three Baltic states also released a joint statement: “We strongly condemn the detention of peaceful protesters in Russia. They must be released immediately. All of us in the EU must be decisive in imposing restrictive measures against Russian officials responsible for arrests.”

Other reports pointed out that the age of the crowd was younger than in most of the previous demonstrations, and more willing to fight the police.

“The amount of direct confrontation between the protesters and police, in multiple locations, is unusual. Riot police aren't even pretending to allow protests and protesters appear to be much more willing to brawl to hold their ground. So yes, this looks different than usual,” tweeted journalist and Russian commentator James Miller.

Yulia Navalnaya was briefly detained by police in Moscow, but released later the same day. She was arrested at the rally in Moscow, although no details are yet available. 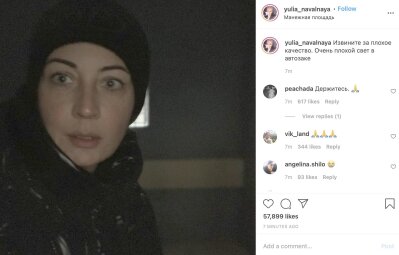 Yulia Navalnaya was briefly detained by police at a rally in Moscow and released this photo of herself in the paddy wagon via social media.

There has been speculation that Navalnaya will following the path blazed by Belarusian opposition leader Svetlana Tikhanovskaya, whose husband was also arrested and who subsequently stood in his place in the disputed August 9 presidential election and would have won if the elections had been free and fair.

Navalnaya’s public profile has been growing in the last half year. She was quick to arrive in Omsk where her husband was hospitalised after he was poisoned in August. She battled with the hospital staff to have Navalny released to a waiting German hospital plane and used the press to call on Russian President Vladimir Putin personally to allow him to leave the country.

She also accompanied her husband on his return to Russia last weekend and was at his side when he was taken into custody at passport control at Sheremetyevo. Now she has been caught up in the day’s demonstrations and has been arrested and released for the first time.

Navalny’s ally, lawyer Lyubov Sobol was also snatched by police during the protests while in the middle of giving an interview to independent TV station TV Dozhd.

Like in Belarus, the organisers of the protests are promising to have a second demonstration next weekend, copying the format of the weekly mass demonstrations that have been running in Belarus for the last six months.

After dark, a group of protesters went to the Matrosskaya Tishina prison where Navalny is held, and where police were waiting for them. Roads to the notorious prison were closed and cars turned away.

Lawyers for the detained were denied permission to enter the prison, despite having all their paperwork in order.

A line of officers charged the protesters and made arrests. The demonstrations outside Matrosskaya Tishina are similar to those in Minsk outside the famous Okrestina jail, where the opposition leaders Sergei Tikhonovsky and Viktor Babariko were held.

From his cell Navalny sent a tongue-in-cheek message via Instagram that also played on fears that the Putin regime would try to kill him for a second time while he is in jail: “I don't plan to hang myself from bars on window, slash my wrists with sharpened spoon. I take the stairs very carefully. I know that outside my jail there are a lot of good people and help will come.”

An OMON officer wanting to arrest a weeping old woman, takes a man who offers himself in her place. "If you have a quota to fill then take me instead" The crowd applauds as the officer leads him away.

Navalny was arrested on his return to Russia last weekend after spending five months in Germany recuperating from a poisoning attack by the military-grade nerve agent Novichok.

The next day he threw down the gauntlet in front of the Kremlin, calling for unauthorised mass protests on January 23. During the rest of the week Team Navalny, his unofficial organisation, sprang into action posting meeting times and places in some 90 towns and cities across Russia – the biggest public protest Russia has seen since at least 2011, and even that protest was largely concentrated in Moscow.

Ministry of the Interior troops had already been active a day earlier arresting organisers, members of Team Navalny and other high-profile opposition leaders ahead of this weekend's protests.

The authorities also called for social media sites like the Chinese TikToc to be closed down for inciting the youth to take part in illegal protests. Russian teenagers enthusiastically took to the airwaves in recent days to give advice on how to avoid arrest during the protests and on what demonstrators should wear in the freezing temperatures.

The Russian embassy in London released a statement trying to downplay Navalny’s importance and branding him a “common criminal.”

“Mr Navalny was detained, in full accordance with the law, for violating the terms of probation. He was convicted for fraud back in 2014, and the European Court on Human Rights dismissed his claim that the case was politically motivated. He was released on probation, but neglected to comply with its conditions even before his alleged “poisoning” last August. He was not bothered during his hospital stay, but after the discharge he continued to break probation rules and ignored the warnings of penitentiary authorities, which led to his current detention. He is not a “political prisoner”, but a common criminal, who flouted the law to look like a victim for political gains,” the embassy said in its statement.

“As for his so-called “poisoning”, first and foremost – no traces of any poison have been found in Mr Navalny during his thorough examinations at the hospital in Russia on 21 and 22 of August last year. Neither was anything of the sort discovered by the “Charité” clinic in Berlin. Only after his samples have been transferred to a Bundeswehr medical facility, all of a sudden traces of weapons-grade chemical agent were allegedly discovered by German military,” the embassy continued.

TRENIN: Russia-Ukraine war alert – what’s behind it and what lies ahead?

Biden and Putin talk for the first time – sanctions threats and summit promises
TRENIN: Russia-Ukraine war alert – what’s behind it and what lies ahead?
ING: Russian ruble downgraded on weak balance of payments in 1Q21