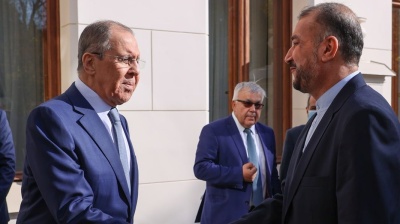 Russia has introduced the idea of a “3+3” format—the three South Caucasus countries of Armenia, Azerbaijan and Georgia plus their three big neighbours, namely Russia, Turkey and Iran—to focus on unlocking economic and transport communications in the South Caucasus region.

Lavrov’s move follows major Iranian military exercises, widely seen as an expression of Tehran’s unhappiness at Azerbaijan’s territorial ambitions assisted by Turkey and big arms buys from Israel, which have been countered by joint Turkish and Azerbaijani war games. Armenia, meanwhile, has been loathe to move towards agreeing to any land trade corridors with Azerbaijan while disagreements over borders remain unsettled. However, as part of the Russian-brokered ceasefire that ended the Second Nagorno-Karabakh War between Armenia and Azerbaijan last year, Yerevan and Baku agreed to explore opening up transport links that would boost trade.

There have been concerns in Tehran, meanwhile, that a land grab by Azerbaijan backed by Turkey could hinder or cut off Iran’s trade route northwards to Armenia, Georgia, Russia and beyond.

TASS reported Lavrov as referring at a press conference to how Russia played a decisive role in halting the Karabakh war, with a trilateral agreement leading to the deployment of Russian peacekeeping troops.

Lavrov was reported as saying that the agreement “contained principles that determine the joint steps to advance the [post-war] settlement, including work to unblock all transport communications and economic ties in the region, which will be to the benefit of not only Armenia and Azerbaijan, but Georgia as well”.

He added: “Iran, Russia and Turkey will also benefit from this as the closest neighbours’ of these three republics.”

According to Lavrov, the Iranian side expressed a positive attitude towards the “3+3” idea, while the same attitude was observed in Azerbaijan and Turkey.

“We work with our Armenian colleagues. We expect that Georgia, in spite of all the problems it is experiencing, will be able to see its fundamental interest in creating such a mechanism for consultations and agreeing decisions on the accelerated development of this region, which for a long time has been holding back its development due to the conflicts remaining there,” Lavrov was further quoted as saying.

Russia and Georgia, which fought the 12-day Russo-Georgia War in 2008, have still not settled disputes over breakaway territories South Ossetia and Abkhazia.

Turkey’s President Recep Tayyip Erdogan last week said after a meeting with Russian counterpart Vladimir Putin that Russia was ready to create a six-nation platform. He has previously referred to such a platform as something that would be a win-win for all regional actors.

Ahead of his meeting with Lavrov, Amir Abdollahian said that Iran was looking for a “big jump” in relations with Russia.