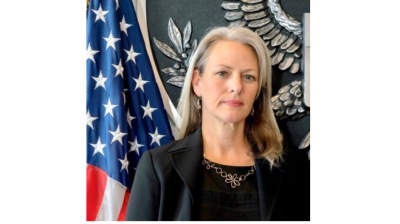 US embassy spokeswoman Rebecca Ross was expelled in the latest tit-for-tat reprisals between Moscow and Russia
By bne IntelliNews May 13, 2021

The US embassy confirmed that Rebecca Ross, who is the official spokeswomen for the embassy, has been made persona non grata and must leave the country. In all, Russia has ordered ten diplomats home as a retaliation following the US imposition of sanctions on April 15.

The Kremlin has also banned Russian nationals from working at the embassies and consulates of “unfriendly countries” that of course includes the US. As the Moscow embassy is one of the largest US embassies in the world about half its staff are local hires and do much of the day-to-day work, including working in the consular section issuing visas. With the departure of the local staff the US embassy says it is no longer able to process visa applications and has suspended the issue of visas for all but emergency cases.

Ross and the nine other American diplomats have until May 21 to leave. The US also expelled 10 diplomats from Washington as part of the April sanctions decision, claiming they were spies. The US sanctions also named 32 Russians accused of interfering in the 2020 presidential election as well as imposing restrictions on US investment into Russian Ministry of Finance ruble-denominated OFZ treasury bills.

“It’s not a Russian initiative,” Kommersant quoted an unnamed Russian Foreign Ministry source, who said that the US has for the past six months not allowed Russia to fill its vacancy of a Russian Embassy spokesperson in Washington.

“The United States simply returned the documents this person submitted for a visa without even commenting on the reason for their refusal,” Kommersant quoted the person as saying.

Russian forces oppose the UK Navy’s Freedom of Navigation Operation off Crimea
Demand for fur coats doubles as Russia swelters in the hottest June for 120 years
Russian industrial production for May up 11.8% y/y