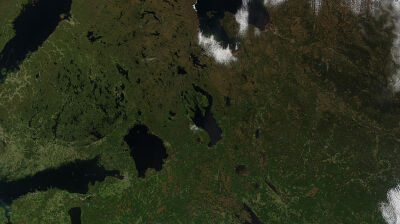 Western Russia and Finland from space. / wiki commons
By bne IntelliNews May 14, 2022

Kremlin spokesman Dmitry Peskov has rejected a Finnish media report that Russia is preparing to cut gas flow to the Nordic country over its decision to apply to join Nato.

The Finnish government announced on May 12 that it would join the defence alliance “without delay”, prompting a fierce rebuke from Moscow. Russia’s foreign ministry quickly warned that the move, which would increase Russia’s shared border with Nato by 800 km, would force Russia to respond with unspecified “military-technical” measures.

"Finland's accession to Nato will cause serious damage to bilateral Russian-Finnish relations and maintenance of stability and security in the Northern European region," the ministry said. "Russia will be forced to take retaliatory steps, both of a military-technical and other nature, in order to neutralise the threats to its national security that arise from this."

Speaking on May 13, Peskov said the Finnish media report was fake.

“Most likely, this is another hoax,” he told a conference call, adding that Gazprom remained a reliable gas supplier. Gazprom has already halted gas supply to Bulgaria and Poland in violation of its supply contracts. Reportedly, it did so after the pair refused to comply with a Kremlin decree that would have required them to make payments for gas in accounts at Gazprombank, for conversion into rubles before transfer to Gazprom.

Finland has said it is committed to phasing out Russian gas imports but this will prove a difficult task. Having no gas of its own, the country relies on Russia to meet 60-70% of its gas demand. Its dependence on Gazprom used to be greater, until the completion of the Balticconnector pipeline that links its gas grid with that of Estonia.

While gas supply continues, Finland also depends on Moscow for some electricity supply, and Russian state-owned power utility Inter RAO intends to stop exports on May 14, because of non-payment, the company’s Finnish subsidiary said on May 13. Inter RAO’s unit said the group had not received payment for electricity sold on the pan-European power exchange Nord Pool since May 6, without specifying a reason for this.

“This situation is exceptional and happened for the first time in over twenty years of our trading history,” RAO Nordic said in a statement.

Russian power supplies to Finland will be halted at 01:00 on May 14 “for the time being,” Finnish grid operator Fingrid said in a separate statement. Fingrid added that there was no risk of disruption to the Finnish energy system, noting that Russian imports only accounted for 10% of the country’s overall consumption.

“Missing imports can be replaced in the electricity market by importing more electricity from Sweden and also by domestic production,” the operator said.

Fingrid began making preparations for a cut in Russian power supply three weeks ago by curbing transmission capacity by a third. The operator said that it had been informed by ROA Nordic that the Russian supply would be halting supply because of payment difficulties with Nord Pool.

Nord Pool declined to comment on the report. Asked whether payments had been required in rubles, it told Reuters: “We have never had settlements in rubles, only in euros, Norwegian crowns, Swedish crowns and Danish crowns, in line with our standard procedures.”

Regarding Finland’s gas needs, Gasgrid Finland is working with Estonian energy company Elering on jointly leasing a FSRU that will be positioned off Finland’s south coast later this year. The vessel is due to arrive in the autumn, ahead of the next winter heating season. If the infrastructure in Finland is not ready to receive the FSRU’s gas in time, then the vessel will initially be anchored off Estonia.

Throwing a spanner in the works for the Nato aspirations of both Finland and neighbouring Sweden, alliance member Turkey has said it will not support their application to join. Turkish President Recep Tayyip Erdogan said on May 13 that his country is “not favourable” to the idea.

“We are following developments concerning Sweden and Finland, but we are not of a favourable opinion,” Erdogan told reporters.

An application to join Nato requires the approval of all 30 of the alliance’s members. Yet despite being a member, Turkey has sought to play a neutral role in the current conflict between Russia and the West, including by hosting peace talks between the Russian and Ukrainian sides on its territories. It has also opposed international sanctions against Russia, and is one of the few European nations that still allows Russian aircraft to enter its airspace.