Russia blames coronavirus spike on return of holidaymakers from Turkey 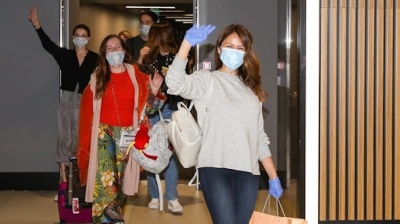 Some of the first Russian holidaymakers to arrive in Antalya, Turkey's Mediterranean "capital of tourism", after the coronavirus block on flights was lifted.
By Akin Nazli in Belgrade November 5, 2020

As much as 90% of around 10,000 “imported” coronavirus (COVID-19) infections detected in Russia were contracted by people who had lately travelled to Turkey, The Moscow Times has quoted Anna Popova, head of Russian healthcare and consumer protection watchdog Rospotrebnadzor, as saying.

More than one million Russian tourists visited Turkey in August and September after officials there said the country’s first coronavirus wave had subsided and resorts had been made especially safe with extraordinary measures.

Before that, flights between Turkey and Russia were halted between March 27 to August 1 as selective lockdown measures took effect. Many Russians also use Turkey as a transit hub to travel on to other countries. Interfax has reported that Russian and Turkish officials are now in discussions about cutting the number of flights between the two countries.

In looking at the extent of the coronavirus outbreak in Turkey, it is important to note that the Turkish government does not follow international reporting norms in providing its infection figures. Officials there do not report asymptomatic coronavirus cases even though infected people with no symptoms can spread the virus. The World Health Organization (WHO) has asked Turkey to start reporting asymptomatic cases—something that almost all countries do—but so far Ankara has stuck to its policy of only reporting cases where symptoms are evident.

In October, the UK quickly reintroduced quarantine for travellers from Turkey after Turkish Health Minister Fahrettin Koca confirmed that Turkey was not reporting the asymptomatic data. The move by the UK might be seen as somewhat late given that for months before it there were media investigations, such as one by the New York Times, and communications from Turkish medical chambers and opposition politicians that very strongly suggested that the official coronavirus data being provided by Turkey was incomplete and a drastic under-estimation of the severity of the pandemic in the country. In August, the UK  named Richard Moore, who served as British Ambassador to Ankara between January 2014 and December 2017, as the new head of its MI6 foreign intelligence agency—as a Turkish speaker, maybe he has some information on this matter.

While coronavirus-stricken Turkish and British travel and tourism operators no doubt got something of a lift from UK officials keeping Turkey open as a “non-quarantine” holiday destination, neither they, the UK embassy in Ankara nor anyone else has provided any data on how many COVID-19 cases were carried to the UK from Turkey as a result of the mini-boom in holidays that was generated by the relaxed rules.

“I’ve talked to Mr [UK PM Boris] Johnson [who has a Turkish great-grandfather]. You say ‘I’m Turk’. There’re tourists who’d come here from there [the UK]. I told him ‘open their way’”, Turkish President Recep Tayyip Erdogan said on June 9 during a televised interview.

On November 4, the Guardian reported that Turkey’s government was still resisting calls from Turkish doctors to introduce what they recommended as sensible and weighty measures against the resurgent pandemic in the country.