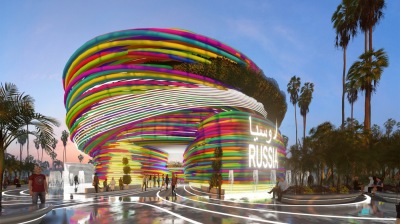 The Russian pavilion is in the theme of “Russia: an infinite source of creativity” designed by the famous architect Sergei Tchoban
By bne IntelliNews October 21, 2021

The Russian pavilion at the Dubai Expo 2020 poised to showcase the country to the rest of the world.

The World Expo has been running since 1851 and has always been a huge event. The light bulb was the centre attraction at the Paris Expo in 1900 as the newly invented lights festooned the pavilions in a dazzling display that was to participants then as impressive as high tech spaceship are to us today. The PC and the telephone also both debuted at the World Expo.

The Expo may have lost some of its pulling power but this year’s event in Dubai is the first to be held in the Middle East and expects some 25mn visitors during the six months the exhibition runs, which will make it the largest in its 170 year long history.

Eastern European countries are putting out their stalls in the hope of selling their wares and attracting badly needed investment. For many counties of the east the Middle East has risen in importance in recent years as disappointment with the lack of enthusiasm from western investors undermines relations.

The Russian Direct Investment Fund (RDIF) has brought in billions of dollars in co-investment thanks to its partnership with UAE’s sovereign wealth fund Mubadala and growing business ties with other Arab countries. The regional government in Kazan also managed to forge direct relations with several Arab investors until the inbound investment ran into the billions and caught the Kremlin’s eye. The annual Kazan Summit a decade ago started to attract not only Arab investors but curious officials from Moscow who were trying to work out what was going on.

The scale of this year’s Expo on a huge scale. There are over 190 participating nations and for the first time all of them have been given their own pavilions. And many countries have gone to town on their pavilion designs, showing off ultra modern buildings that reflect the Expo themes.

The Russian pavilion is in the theme of “Russia: an infinite source of creativity” and styles itself as answering the question: “How do we find our place in an interconnected world, and how can we better understand each other despite our differences?”

Its exhibition is designed to show off Russia’s world class technologies in several sectors of science, medicine and technology where it has long been a world leader. Moscow pulled out all the stops as its is bidding to host the Expo in 2030.

Russia’s pavilion looks pretty edgy, designed by the famous Russian architect Sergei Tchoban. The construction is in keeping with the Expo’s overarching theme of “Connecting Minds, Creating the future”, by “exploring how the mind is fundamental to driving human progress.”

It hosts exhibits of diverse Russia’s regions, including Moscow, Saint Petersburg, Tatarstan and Komi, as well as a range of Russian companies, such as Rostec – an industrial and technology conglomerate, and Rosatom, a nuclear corporation. The private sector is represented by Alisher Usmanov’s USM Group, which showcases the nexus of ecology, science and society that unite its various businesses. 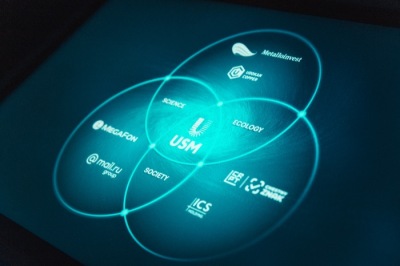 The architecture of the pavilion itself plays on this theme, by being constructed from large coloured elliptical rings that span the pavilion’s circumference, so the building appears to alter its shape and colour as pedestrians circle the building – echoing the idea of a world advancing into the future.

The pavilion is built in the form of a giant dome, with its outer shell consisting of many tiny multi-coloured tubes. Their interlacing creates a visual effect of endlessness and symbolizes the eternal process of cognition and learning the world.

The exhibition within the pavilion, created by Simpateka Entertainment Group, researches the brain and the multimedia installation shows its structure and how it works.

The pavilion also has a busy cultural program, including best opera and ballet stagings, lectures, museums’ presentations and Russian language lessons. The festival ‘From Russia with…’ will showcase the best movies, animations, performances and digital art pieces. 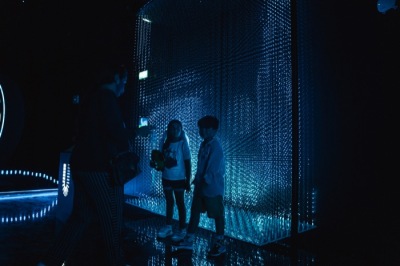