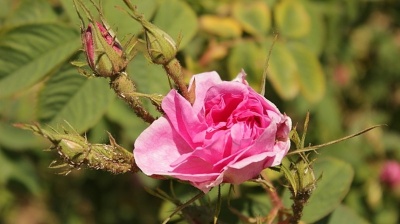 Bulgaria’s rose oil is the most expensive in the world thanks to its unique and rich chemical composition.
By Denitsa Koseva in Sofia May 18, 2021

The rose plantations that fill the Rose Valley in Bulgaria’s Balkan mountains are one of the country’s most beautiful sights. But as the market for rose oil collapses, as much as 40% of this year’s crop may be left to wither and many farmers plan to raze their roses after the season is over.

Whether the first roses were brought to Bulgaria by Thracian warriors among the soldiers of Alexander the Great, or introduced by the Turks during the Ottoman empire, the cultivation of oil-bearing roses is a tradition going back centuries. Each year the town of Kazanlak, at the centre of the Rose Valley, where production started in the 17th century when Bulgaria was part of the Ottoman empire, hosts a rose festival to celebrate the fragrant harvest that until recently brought a degree of prosperity to the area.

For the last few years, however, rose farmers have been struggling as the price of their crop has fallen sharply. This year, the price for oil-bearing rose is expected to be as low as BGN1.6 (€0.8) per kilogram, which is around 40% less than previously anticipated, the head of the Association of Rose Producers, Hristo Nikolov, told public broadcaster BNR.

As a result of this low price, warned Nikolov, at least 40% of Bulgarian rose fields may remain unharvested and some of the producers will destroy their plantations in the autumn as they no longer see the cultivation of roses as economically viable.

It is a labour intensive business as more than 3,000 kg of rose petals are needed to produce 1 kg of rose oil, dubbed a ‘liquid gold’ by producers due to its unique properties and the high price at which it has until recently been sold on international markets. Bulgaria’s rose oil is the most expensive in the world thanks to its unique and rich chemical composition.

Rose petals are gathered by hand and only in the early morning hours, when the flowers are blossoming and the essential oil they contain is in the highest concentration.

Small vials of rose oil are sold at tourist resorts in Bulgaria, but thanks to the quality of the Bulgarian oil most of the local production is exported. It is used by luxury companies such as Elizabeth Arden, Chanel, Bulgari, Estée Lauder and Christian Dior.

Now, however, the industry is struggling. This isn’t just a product of the coronavirus (COVID-19) pandemic, but an issue that has been mounting for several years. Back in 2018, producers complained that the price for their product was falling, claiming the mafia had targeted the sector.

However, analysts said at the time that the price was falling after it had risen excessively in the years before and that the fall was provoked by market demands. While the production of rose oil is a traditional industry with a long history in Bulgaria, it has been suffering from competition from Turkey in recent years.

This year, the rose producers also have issues finding workers and markets. According to Nikolov, rose picking this year will start late with some of the producers not even starting the season.