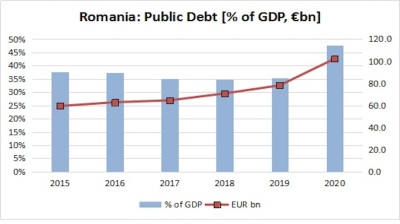 The two Eurobond issues launched by Romania at the end of November 2020 to build up the buffer, €2.5bn altogether, were apparently disbursed in December — but even so, the supplementary public borrowing remains high.

Public indebtedness increased amid governments' efforts to support the private sector and address the health crisis not only in Romania but across the whole of Europe.

Romania's economy contracted last year by 3.9% compared to 2019, a better result than previous estimates, and the budget deficit widened to 9.7% of GDP.

This year's moderate fiscal consolidation is likely to keep the public deficit at an elevated level of above 7% of GDP, which is expected to bring the public debt up to over 50% of GDP.

On the upside, the robust buffer announced by Prime Minister Florin Citu and the positive GDP growth are cushioning the pressure generated by the large financing needs.

Romania’s Chimcomplex shares soar by 29% on WSE listing news
Romanians gripped by cryptocurrency euphoria during the pandemic
Romania’s construction works down 0.6% in 2M21