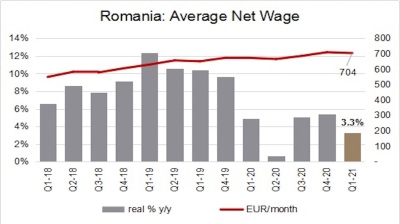 In real terms, deflated by the consumer price inflation, the average net wage rose by 4.5% y/y, while the annual growth rate of the net wage expressed in foreign currency was 6.3% y/y.

However, the growth in net wages in Romania has slowed down visibly from the high annual rates seen in the past. In the first quarter of the year, the net average wage increased by only 6.4% y/y, which is 3.3% y/y in real terms, the weakest performance since 2013 except for the second quarter of 2020 (during the lockdown).

On the upside, a 3.3% y/y real growth is still robust and likely to support the expansion of private consumption. For Q1, the average net wage expressed in euros increased by 4.6% to €704.

The wages in the public sector indeed remained steady (+/- 1%) in the first quarter of the year in line with the government’s decision. In the public administration, they are already well above the economy-wide average (RON5,069); in the health sector they rose marginally by 0.5% q/q to RON4,193; and, in education they remain only slightly above the economy-wide average (RON3,608).