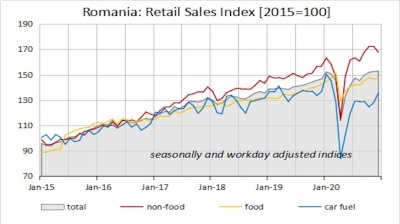 Romania's retail sales volume index increased by 1.6% y/y in January — a growth rate that is less than half of that in November-December and a third of the robust 4.7% y/y rise in September..

It was also the weakest performance since last May when retail sales plunged by 5.5% y/y during the lockdown.

Food sales remained strong during the crisis, except for April, as a correction after the excessive purchases in March, while non-food sales shifted online once physical stores were closed and thrived during the past year: they increased by 10% in the second half of 2020, compared to the same period of 2019.

The movement restrictions deeply hurt sales of fuels, though: they contracted by 5.7% y/y in the second half of 2020.

In January this year, non-food sales increased by only 1.5% y/y.

The figure seems to be explained by the concerns generated among households by tighter budget spending this year. The government froze the wages in the public sector, and the wage hikes in the private sector remain uncertain as financial managers are strictly monitoring the costs.

Fuel sales remained in the negative area, with a 6% y/y contraction. Neither domestic tourism nor daily commutes returned to normal, which will remain visible in the fuel sales for the first part of the year.

Romania’s Chimcomplex shares soar by 29% on WSE listing news
Romanians gripped by cryptocurrency euphoria during the pandemic
Romania’s construction works down 0.6% in 2M21

Now second only to India for new infections, the country is in a desperate situation that health professionals say the government is failing to acknowledge.

Turkey’s descent into coronavirus hell
1 hour ago
Romania’s Chimcomplex shares soar by 29% on WSE listing news
14 hours ago
Montenegro’s public debt spikes at 82.48% of GDP in 2020
1 day ago
Polish core inflation rises to 3.9% y/y in March
1 day ago
Romania’s construction works down 0.6% in 2M21
2 days ago