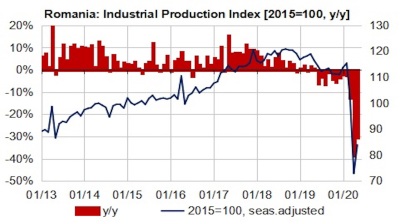 Romania’s industrial production, seasonally and workday adjusted, rose by 15.1% in May compared to April, partly recovering after the deep 27.9% dive in April.

The recovery, likely to continue for a couple of quarters unless a new coronavirus (COVID-19) wave hits the country and/or its trade partners, is a short-term development as the industrial slowdown preceded the coronavirus crisis and was visible at least since mid-2019. In February, before the coronavirus outbreak, the industrial output in Romania was 2.4% lower y/y (-1.9% y/y in manufacturing).

Thus, the €100bn investments promised by the government under its 10-year plan address deeper problems faced by the country’s industry, and the coronavirus was only a trigger. The optimistic rhetoric of boosting infrastructure investments to facilitate investments in the manufacturing sector makes sense in theory, but it is hindered by the government’s weak capacity (financial, as well as bureaucratic) to actually implement such ambitious plans.

Eventually, economics will determine the volume of investments (foreign and local) in new or upgraded production capacities. The European Union's €750bn recovery plan out of which Romania expects €30bn in grants and loans, which is still being debated, is critical for the improvements in infrastructure.

Compared to February, the last month before the coronavirus crisis hit the economy, Romania's industrial activity in May was still 27.3% less intense (-30.6% in the manufacturing sector).

This comes as an improvement compared to April when the output was 36.8% lower compared to February in the whole industrial sector and 42.8% lower in the manufacturing sector, during the full lockdown. The state of emergency began on March 15 and ended on May 15 when the factories that suspended operations gradually resumed operations at low capacity.

In the automobile industry, the production in May was still less than half (-57.1%) compared to February, after the deep 81% decline (also against February) seen in April. Before the crisis, in February, automobile production was down 1.1% y/y.

There were industries that performed above average during the crisis and enjoy a robust outlook. The food industry, for instance, was less hit by the crisis and its output in May was 10.1% lower compared to February, roughly at the same level as in April. The food industry was on a volatile upward trend before the crisis (+3.4% y/y in February). But even in this sector, French group Lactalis closed two of its five dairies in Romania with a view to optimising its operations.

Belarus inflation in July remained flat compared to June at 5.2% year on year
10 hours ago
Romania’s June industrial production still lags 15% behind pre-crisis level
20 hours ago
Wages in Romania grow in Q2
1 day ago
Russia's GDP fell by 8.5% in 2Q20 due the lockdown quarantine measures
1 day ago
Ukraine’s consumer inflation stayed at a 2.4% y/y level in July
2 days ago