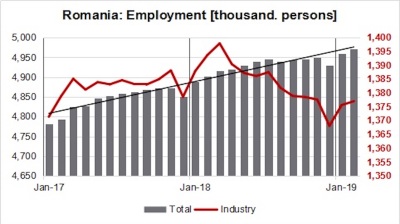 The number of employees in Romania’s economy reached a ten-year high in February: 4.97mn people, up by nearly 70,000 (+1.4% y/y) compared to the same month of 2018, according to the National Institute of Statistics (INS).

At the same time, unemployment kept dropping to new record low values: the registered unemployment was 3.3%, the lowest since 1990, while ILO unemployment (seasonally adjusted) was not far its historic minimum at 3.8%.

The primary driver was the shrinking workforce in low-earning sectors of light industry (-7.5%, or 8,800 fewer jobs in clothing manufacturing). Interestingly, employment in the sector of transport means (cars) production dropped by 6.4% (13,200 jobs) at a time when automakers are increasing their output, which indicates that technology investments in high-earning sectors (such as car production) tend to substitute labour with the final result of higher productivity and hence sustainability.