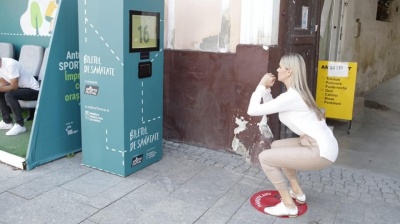 One Cluj-Napoca resident prepares to earn her bus ticket.
By bne IntelliNews August 25, 2021

The Romanian city of Cluj-Napoca is getting its residents moving by offering a free bus ticket in exchange for 20 squats.

Anyone who takes on the challenge at Memorandumului Sud bus station gets a Health Ticket that is valid for a single trip on the Cluj-Napoca public transport network for seven days, under a smart ticketing scheme organised by Sports Festival, the largest multi-sport event in Romania.

“The Health Ticket is back!” the organisers announced on Facebook.

"All our actions since we launched the festival have the same mission: to inspire people to move, to discover what sport suits them and to let that sport transform their lives.

"Now more than ever, we believe it is absolutely necessary to give sport more attention and a central place in our lives. Sport can be the basis for prevention and education, the public can be directed to healthy behaviours in the long run,” said Mirel Alexa, executive director of Sports Festival.

The company said in a press release it is “proud to be partners in this project, especially as it aims to encourage the movement in a simple and enjoyable way. … We are waiting for you, dear Cluj residents, with us, at the Health Station and we hope that, together, we will challenge ourselves to become healthier and happier!”

The squats-for-tickets scheme was launched last year as well, and proved so successful it continued until the end of the year, supported by private partners NTT DATA Romania, AROBS and Terapia, who agreed to cover the cost of tickets.

14,500 health tickets were issued during the initial two weeks of the pilot alone, well above expectations and initial calculations, Sports Festival said. By the end of the promotion Cluj-Napoca residents had done more than 1mn squats.