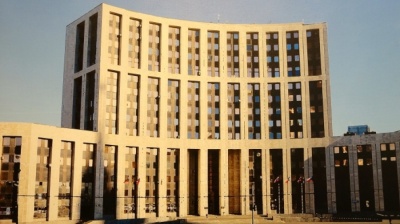 The IID's Moscow headquarters before its move to Budapest.
By Iulian Ernst in Bucharest May 26, 2022

The government of Romania, as a shareholder, and pension fund managers, as bondholders, will negotiate with the International Investment Bank (IIB) with a view to ‘neutralising’ the impact of the country’s withdrawal from the ‘Russian’ bank, Finance Minister Adrian Caciu said after the May 25 government meeting.

Romania has been planning to pull out of the IIB for a couple of years, but Russia invading Ukraine accelerated the process. Several Central European countries also announced their decision to quit the bank.

The negotiations in Romania will take place while lawmakers are discussing the draft law that provides for the denunciation of the agreement sealed by Romania, in 1970, as a founding member of the IIB.

The IIB is a development bank set up during the communist era and later revived by Russia. IIB provides loans to companies from member states. Its shareholders are Bulgaria, Cuba, the Czech Republic, Hungary, Mongolia, Romania, the Russian Federation, Slovakia and Vietnam. Last year it made a profit of €7.9mn, up 8%, and had assets of €1.8bn, up 20%.

The Czech Republic, Bulgaria, Slovakia and Romania announced their decision to quit both the IIB and another Soviet-era international bank, the International Bank for Economic Cooperation (IBEC), because of the Russian invasion of Ukraine, leaving Hungary – which hosts the IIB’s headquarters – isolated as the only EU country which remains. Poland already quit the IIB in 2000 but now aims to leave the IBEC.

In March, the Slovak government and the Czech Chamber of Deputies approved the termination of their memberships in the IIB and IBEC.

Commenting on the process in Romania, Caciu said Romanians “have nothing to worry about”.

"The pension funds have known about this decision [to withdraw from the IIB] for three months and I believe that the negotiations we will carry out together, on their part as investors, on our side as shareholders, will lead to a neutral impact,” the minister added.

The time lag since the government announced the decision and the actual steps taken to implement the decision “allowed everybody to regroup and protect the exposure Romanians would have had otherwise,” spokesperson Dan Carbunaru stated. In other words, the pension funds had plenty of time to settle their exposure with IIB, the government’s representative seems to suggest as a precaution ahead of the possibly painful withdrawal from IIB.

By unilaterally terminating the contract signed among the IIB shareholders in 1970, Romania may lose the €26mn capital subscribed and paid — but IIB’s creditors, among whom there are four Pillar II pension funds (and possibly other Pillar III funds), may also lose part, or all of their placements, reportedly around €125mn.

Besides the RON500mn (€100mn) three-year bonds issued on the Bucharest Stock Exchange (BVB) that mature this November, IIB has also issued bonds denominated in Romanian leu under the multi-currency medium-term notes (MTN) programme carried out on the Irish Stock Exchange.

A first RON110mn one-year issue launched in April 2020 already matured last year, but there are other three bonds with a total face value of RON730mn (nearly €150mn), resulting in a total of RON1.23bn outstanding RON-denominated bonds.

Around half of them are reportedly in the portfolio of the Pillar II pension funds.

On the other hand, the four largest loans extended by IIB to Romanian companies add up to only €67mn.

In other words, at this moment IIB is a net debtor (with around €180mn) to Romanian entities (assuming all leu bonds were purchased by Romanian investors — which may not necessarily be true).

Furthermore, the ‘long-term’ financing of IIB includes bonds with maturities of up to three years (meaning they are going to mature over the coming two years), while most of the loans extended have much longer tenors — seven years, typically.