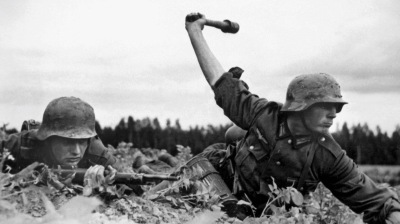 "Life must be understood backwards so that it can be lived forwards."
By Julian Rimmer in London June 15, 2021

Joseph Stalin did not trust his mother; nor did he trust his wife, his children, his ‘friends’, the Politburo, his party, his generals, his soldiers or the Soviet people. The solitary individual Stalin trusted, it seems, was Hitler. Eighty years later, as we approach the anniversary of the launch of Operation Barbarossa on June 22, 1941, Russia is still rueing the consequences of history’s most fatal misjudgement of character.

Stalin was the only person in the world taken aback by the largest invasion force ever assembled, an army of three million men. Everyone else saw it coming – literally. His misplaced confidence that the fellow signatories of the 1939 Molotov-Ribbentrop Pact would honour the non-aggression agreement meant he disregarded the unignorable evidence and teeming intelligence that a large-scale offensive was imminent. Stalin’s paranoia prevented him from seeing what was before his very eyes. His astonishing naivety and resultant lack of preparedness guaranteed that the blood sacrifice required to oppose and eventually defeat Operation Barbarossa was stupefying in dimension and mostly unnecessary. History is the narrative of everything that needn’t have been that way and Russia is history on steroids.

The Soviet Union’s ultimate triumph over Nazism now forms the founding myth of Putin’s Russia. It is the event most central to its history and most germane to the nationalism Putin fosters to prop up his crypto-fascist regime. It provides a licence for Russia’s foreign policy. Propagating this cult of the Great Patriotic War, though, demands that its followers ignore some uncomfortable truths. Namely, that Stalin’s omni-incompetence and a pitiless indifference to fatalities (in this, he matched Hitler) contributed hugely to the staggering 27 million deaths suffered by the Soviet Union in the conflict. In October 1941, with the German panzers almost at the gates of Moscow, Stalin was pretty much throwing his troops under enemy tanks to stop their advance while his NKVD machine-gunned those who, understandably, ran in the opposite direction. Incontrovertibly, the Soviet Union can claim it paid the highest price for the Allied victory in 1945. It was the Pyrrhic victory ne plus ultra.

Worse still, the victory, such as it was, ensured that Stalin remained in power for another eight extremely damaging and suffocating years. This cemented the foundations of the totalitarian state, which has to a greater or lesser extent kept the Soviet Union and then Russia in its adamantine grip for the last three generations. There is a direct line of descendancy from Stalin through the zastoi of Khrushchev, Brezhnev et al to the Mafia Daddy and Bond villain sitting in the Kremlin now. Russia remains a polity governed for the benefit of those above and not below.

The moment on which WWII turned, arguably the moment on which the entire 20th century turned, was Stalin’s decision to stay in Moscow in the autumn of 1941 and organise its defence, successfully in the end. While I’m no enthusiast of counterfactual history, it’s hard to believe, though, the war could not have been won with less expense of human life. After all, with his tactic of “reculer pour mieux sauter,” Tsar Alexander overcame Napoleon, a far superior military strategist to Hitler, by simply withdrawing and leaving his opponent defenceless to face “General Winter.” Napoleon invaded on June 24, two days later than Hitler. The two of them left it too late and it was fatal on both occasions.

Germany was lucky in one respect: they got shot of the psychopath who had kept a nation in thrall for a decade and a half. That facilitated the founding of what’s now a fiercely democratic political system and the rebuilding of the dynamic economy, which transformed Germany into one of the success stories of the second half of the 20th century. When one looks at the respective fortunes of the Soviet Union and Germany in the fifty years after the war, it’s sometimes problematic to represent the former as victors. Germany was able to start again from scratch. Russia is still trapped in its past, still fighting that imaginary Great Patriotic War. Germany lost the war but it won the peace.

“We only have to kick in the door,” boasted Hitler before he changed the codename of the operation from Fritz to Barbarossa, “and the whole rotten structure will come crashing down.” He was right about the structure being rotten but wrong about the crash.

Every country is guilty of mythologising its past to suit its modern requirements, of trying to establish a collective, national memory to exploit for present political benefit. Britain defines itself by empire, the Somme, Churchill and its “finest hour.” The French and the Americans have their revolutions. The North Koreans have the amazing round of golf played by the Great Leader, Kim Il Sung, comprising eighteen holes-in-one.

Even were it not for the coronavirus (COVID’s) third wave, I would not expect the Russians to commemorate Operation Barbarossa on Monday. Victory Day May 9 is much more the Kremlin’s triumphalist, storytelling style. Putin’s political scientists are repeatedly rewriting its history books, closing the archives, engaging in memory wars with former allies, undermining Western democracies, continually trying to rehabilitate the legacy of Stalin and renovate the recollection of the disastrous human experiment that was Marxist-Leninism in the Former Soviet Union.

Russia is trapped in an unreal past by unreliable and unprincipled narrators who would do better to remember Kierkegaard’s dictum: “Life must be understood backwards so it can be lived forwards.”