RIMMER: Some Muslims are more equal than others 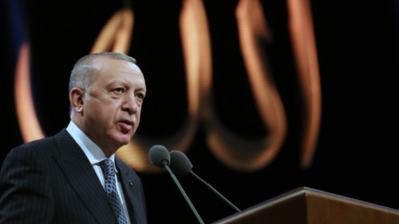 Erdogan’s condemnation of perceived Western indifference to the plight of the Palestinians is part of his efforts to portray himself as the leader of the Muslim world.
By Julian Rimmer in London May 18, 2021

All Muslims are equal but, from the standpoint of the Turkish president at least, some are more equal than others. The value of a Palestinian Arab is prized far above rubies but a Turkic Uighur? Less so. The weight of the former in propaganda terms is set against the expendability of the latter. You can forget about the Ummah; it’s simply a question of political expedience.

The moral high ground in the Middle East conflict is fought over like the Somme: it’s attritional and deadly and progress is measured in inches and lives. It’s also chock-a-block with hypocrites but Erdogan has staked out his patch in the battleground of cant, commanding the strategic heights and standing head and shoulders above his adversaries.

It’s self-evident that for the last 10 years or more Erdogan has sought to project himself as the new Caliph and this has informed much of his grandstanding in global affairs and his bellicosity within his near and not-so-near abroad. This ambition explains his radical interventions in Syria, Somalia, Libya, Egypt and Azerbaijan among others and his decade-long ding-dong with the Saudis over the right to regard himself as the authentic leader of the Muslim world.

The adventurism also serves to distract unwelcome attention from the economic destruction he has visited upon his own people. “Fellow Turks: you may not have a porcelain receptacle in which to micturate but don’t worry! Here I am on the world stage, gladhanding it with Maduro and Lukashenko. Look on my diplomacy, ye envious and despair’’. One could argue Turkey does not even have a foreign policy: it has a domestic policy played out abroad.

The most recent outbreak of hostilities in Gaza, then, provides the Turkish president with an opportunity to showcase himself as the defender of oppressed Muslims everywhere, calling out the West for its racism and its imperial legacy. In lurid terms, he just accused US President Joe Biden of “bloody hands” that sell laser-guided missiles to the Israelis and invoked the Pope’s support in stopping the offensive in Gaza. Is the outrage confected? Does a bear excrete in a sylvan setting?

In 2009, before his moral compass was decommissioned, then Prime Minister Erdogan asserted with reference to the mistreatment of the Uighurs of Xinjiang by the Chinese: “The incidents in China are, put simply, a genocide.” It probably wasn’t back then but it is now.

In 2021, though, with Turkey facing a runaway pandemic, a currency collapse, a balance of payments crisis and another tourist season likely lost owing to economic mismanagement of vaulting incompetence, Erdogan needs Chinese financial support and investment (and a big defibrillator). Erstwhile concern for his Turkic brethren has vanished more alarmingly and more rapidly than son-in-law ex-Finance Minister Berat Albayrak’s feat of monumental imbecility in smoking $128bn of FX reserves trying to defend the lira last year. Not since Xerxes lashed the Hellespont with rods has so much energy been expended in so futile a gesture.

Barely six weeks ago, China’s foreign minister, Wang Li, was given the Turkish rug treatment and not only was the plight of the Uighurs absent from the official communiques but Seyit Tumturk, a vocal, Istanbul-based Uighur activist was forcibly quarantined on government orders so he could not interfere with the realpolitik pow-wow and protests would not upset diplomatic niceties. The Turks and the Chinese, in between Belt and Road Initiatives, trade agreements and tendering nuclear power plants (NPPs), have also signed a mutual extradition treaty. In 2017 it was used to ship back the most prominent Uighur activist in exile, Abdulkadir Yapcan, to China. No red carpet awaited him on his return.

Wan Li’s visit in March occasioned the 50th anniversary of the establishment of Sino-Turkish ties. However, recognition of Israel by Turkey, the first Islamic nation to make the gesture, preceded that by more than two decades. Illegal occupation of the West Bank and the siege of Gaza be damned also, until quite recently when Erdogan suddenly realised that after two decades of his foreign policy, he was increasingly isolated strategically and needed to repair relations with someone or anyone. Spare us the sanctimony, the counterfeit moral outrage.

Erdogan’s condemnation of perceived Western indifference to the plight of the Palestinians is also at odds with his determination to return to the principles of neo-Ottomanism in his foreign policy. The Ottomans ruled Palestine for four centuries until 1917 but far from beatifically and certainly not well enough for, after a successful campaign, Allenby’s Egyptian Expeditionary Force not to be welcomed as liberators by the open arms of those occupied.

Erdogan was anxious to highlight the “disproportionate attack” on Gaza as if somehow the war waged against Armenia by Azerbaijan with Turkish backing last year took place on equal terms, or the campaign against the Kurds in Northern Syria in late 2019 was a fair fight. Show me a military conflict in history wherein the mightier power did not use disproportionate force. That’s the whole point of having it. Power, by its very definition, is disproportionate.

Demands on behalf of the international community to end the violence in Gaza are unquestionably justified but Erdogan’s cynical advocacy of Islamic brotherhood smacks of insincerity. His Muslim solidarity is opportunist. The sense of “Pick on someone your own size” applies equally to Israel and China. What it boils down to is the money – Erdogan needs China’s – and when they say it’s not about the money, you know for sure, it’s about the money.

What this kowtowing to Beijing, the explicit endorsement of Hamas and bombast to Washington demonstrates above all, though, is that Turkey’s membership of NATO is untenable and short-dated with the current “leadership.” It’s as clear as the toothbrush moustache stuck on Erdogan’s lip whom he is worried about offending and whom he’ll indulge. I’m not even saying backing China versus America is the wrong judgment long term, but the geopolitical map is being recharted and I’m not sure most Turks realise.

Julian Rimmer is a London-based broker who has been working in and covering the Emerging Europe markets for several decades.

Russia’s Communist Party (KPRF) occasionally takes its role as the main opposition party seriously. Its MPs voted against the constitutional amendments in 2020 and giving Putin two more terms. But can it remake itself into a real opposition?

COLCHIS: Where is Strategic Communications Headed in Georgia?

Dramatically rising prices, rioting over the Tbilisi pride and protests against the ruling Georgian Dream party are undermining the country’s reputation as a liberal reformer and weakening the government’s ability to communicate with voters

Sectoral sanctions have arguably been the most significant innovation in the sanctions tool box over the last decade. Despite reticence over Russia, Brussels now leads the way on expanding their use beyond the Ukrainian conflict, targeting Belarus.