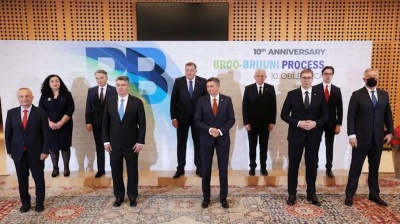 The leaders of the Brdo-Brijuni process met in Brdo on May 17.
By Valentina Dimitrievska in Skopje May 17, 2021

The leaders of Slovenia, Croatia and six Western Balkans countries endorsed a declaration on May 17 urging the EU to speed up the accession process of the entire Western Balkans, as quickly as possible, the cabinet of Slovenian President Borut Pahor, who hosted the meeting, said.

The leaders of the Brdo-Brijuni process, from Slovenia, Croatia, Albania, Bosnia & Herzegovina, Kosovo, Montenegro, North Macedonia and Serbia gathered in Brdo near Kranj in Slovenia for an emergency meeting on the 10th anniversary of the initiative.

The leaders reaffirmed their commitment to EU enlargement, but failed to reach a consensus against border changes in the region due to the Serbia's opposition.

They also urged the EU to launch accession negotiations with Albania and North Macedonia without any delay.

“The EU enlargement of the entire Western Balkans is in political, security and economic interests of the Union, and represents a geopolitical necessity and the main political condition for a stable, prosperous and sustainable European future,” said the declaration.

The politicians said that the EU must take a more active approach regarding the Western Balkan enlargement process and encourage countries to meet clearly defined conditions for the EU membership.

Regarding the challenges posed by the COVID-19 pandemic and its economic and social consequences, the leaders stressed the need to use the recovery process as an opportunity for a green and digital transition that will lead to sustainable development.

Pahor was cited by Slovenia’s Zurnal 24 as saying that the Brdo-Brijuni process was very demanding but successful, even though there were “raised tones and reconciliation”.

At the news conference after the summit, Pahor said that the meeting was one of the most difficult, as each participant presented their views, but in the end, they reached a compromise on a declaration.

Pahor underlined that the declaration called on the EU to see the Western Balkans as a whole and not just as individual countries with which the European Commission is negotiating.

The inviolability of borders was not mentioned in the declaration due to opposition from Serbian President Aleksandar Vucic, although, according to Pahor, all leaders of the initiative oppose border changes.

As he explained, Vucic did not oppose the inclusion of the topic in the text, but suggested that special wording be used, which would practically disable all diplomatic recognitions of Kosovo.

According to Serbian agency Tanjug, Vucic said that he was worried about the future of the Kosovo-Serbia dialogue.

“We will be ready to talk, to participate in the dialogue, but what I’ve heard today, which is the agenda of the entire Pristina government, makes me very worried, because there is nothing rational there," Vucic was cited as saying.

President of Kosovo Vjosa Osmani, speaking to Kosovan broadcaster RTK following the Brdo-Brijuni summit, said that Vucic insisted the issue of border changes in the Western Balkans be left only to the member states that are part of the UN.

About North Macedonia’s dispute with Bulgaria, Croatian President Zoran Milanovic was cited by Skopje-based broadcaster Sitel as saying that North Macedonia is an “impossible situation”.

"What is now the official policy of an EU member state towards North Macedonia is entering another country’s intimate space. To ask a candidate country to define its national genesis in history textbooks, as required by a neighbouring country it represents an entering an intimate space and I will openly oppose that," Milanovic said.

Bulgaria vetoed the start of EU accession talks with Skopje at the end of 2020 due to the historical and language issues.