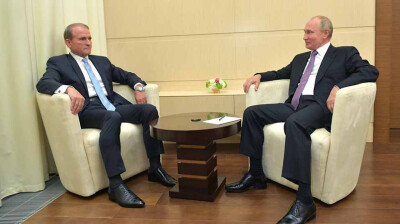 Viktor Medvedchuk, a Ukrainian opposition party leader and personal friend of Russian President Vladimir Putin, has been charged with high treason.
By bne IntelliNews May 12, 2021

A controversial figure, Medvedchuk is the head of the Political Council of the Opposition Platform, For Life Party, currently rated the second most popular party in Ukraine after the ruling Servant of the People (SOTP). He is also a close person friend of Russian President Vladimir Putin, who is godfather to Medvedchuk’s daughter.

He is accused of leading a fifth column from the top of Ukrainian politics and acting as a proxy for Russia’s interests. The latest charges follow on from a growing crackdown on oligarchs by the government.

In February the government imposed sanctions on Medvedchuk for “financing terrorism” and closed down three leading TV stations associated with him and his business partners.

Ukrainian President Volodymyr Zelenskiy gave what has been dubbed his “oligarch speech” in March, which focused on anti-corruption issues and in particular addressed Ukraine’s problem with respect to oligarchs. Also this week the government has drawn up a list of problem oligarchs containing a dozen names that has not been released but reportedly includes that of oligarch Ihor Kolomoisky, who is a friend of Zelenskiy’s.

Zelenskiy’s popularity had been waning in the polls but revived somewhat recently following a series of decisive actions by the president against the oligarchs and attempts to exert pressure on the West into giving greater support for Ukraine in its undeclared war with Russia in the east of the country.

Now the campaign against the oligarchs is being ratcheted up another notch. Ukraine's Prosecutor General Iryna Venediktova, a Zelenskiy loyalist, said in a statement that she had put her signature "on the reports of suspicion of two deputies of the Ukrainian Parliament – M and K.”

Interfax Ukraine and other media said the initials referred to Medvedchuk and Taras Kozak, the legal owner of the three television channels that were subjected to sanctions in February. Kozak could not immediately be reached for comment. Medvedchuk also went to ground, although his friends and colleagues claim he is still in the country.

On the same day, the State Security Service searched the house of Medvedchuk in Kyiv.

Medvedchuk has denied all wrongdoing and described the crackdown against him and his associates as illegal and designed to deflect from the Ukrainian government's policy blunders.

The moves against Medvedchuk will raise some eyebrows, as despite his ties to the Kremlin his Opposition Platform Party has 44 seats in Parliament, making it the second-largest after SOTP, and represents a large minority of largely Russian-speaking Ukrainians that want to see better relations with Moscow.

Venedyktova said that Medvedchuk and Kozak are suspected of colluding with the Russian government to extract natural resources in Crimea, which was annexed by Russia in 2014.

Medvedchuk reregistered his Kyiv-based company according to Russian laws to continue extracting gas in the peninsula, according to Venedyktova, which is now illegal under Ukrainian law.

According to the tapes provided by the State Security Service, Dmitry Kozak, deputy head of Putin’s administration, personally oversaw the passage of a new law that would allow Ukrainian companies to continue working in Crimea if they reregister in Russia. The law was specifically designed to accommodate Medvedchuk, claims Venedyktova.

Moscow back on lockdown as coronavirus infection rate surges again
7 hours ago
Lukashenko pushing illegal Iraqi refugees over the border into Lithuania
8 hours ago
Belarus is the “North Korea” of Europe, says US diplomat
3 days ago
European commissioner confirms €30bn EU investment plan for Western Balkans
3 days ago
Merger between Moneta Money Bank and Air Bank in trouble after proxy firms come out against
3 days ago