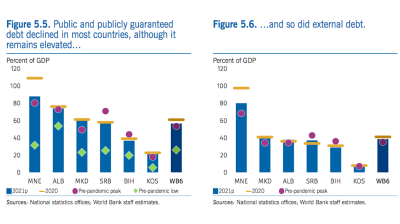 The Western Balkan countries’ public and publicly guaranteed (PPG) debt, including external PPG debt, has started to decline as a share of GDP, though it remains high, a report from the World Bank said.

Across the region, the average PPG debt to GDP ratio fell from 60.8% of GDP in 2020 to 56.5% in 2021, as economies recovered from the coronacrisis, according to the Western Balkans Regular Economic Report: Spring 2022 published by the World Bank in May. The ratio is, however, still higher than before the crisis in 2019.

In 2021, Montenegro – the worst hit economy by the coronacrisis in 2020 – experienced the sharpest decline in the PPG debt to GDP ratio in 2021. The ratio fell by 21 percentage points (pp).

According to the World Bank, this was mainly because Montenegro raised funds through a Eurobond in December 2020. “[M]ost of the 2021 financing needs were covered from the deposits accumulated through the Eurobond issuance in December 2020, with no need for new borrowing,” the report said.

While Kosovo’s PPG debt remained, all the other Western Balkan countries saw their PPG debt fall as a percentage of GDP, including Albania, despite the country raising €650mn from a Eurobond issue in November 2021.

Again, the steepest decrease was in Montenegro, which repaid external debt amounting to 7.3% of GDP during the year, thus lowering its external PPG to 80% of GDP.

External PPG debt as a percent of GDP also fell in North Macedonia and Bosnia & Herzegovina, mainly because of the increase in the nominal GDP of the two countries.

On the other hand, Albania’s and Serbia’s external PPG increased as both countries issued Eurobonds in 2021, and Serbia also issued green bonds.

Looking ahead, the World Bank notes that the Western Balkans could suffer as a result of investors backing away from emerging markets.

“Favourable financing conditions are likely to revert due to geopolitical tensions in Europe and the announced monetary tightening,” the report says.

"Most Western Balkan countries have become increasingly reliant on external financing, and the monetary tightening in the United States and global geopolitical tensions are weighing on investors and have already resulted in significant outflows from emerging markets. The Western Balkan countries are vulnerable to these developments, particularly those countries with high debt burdens and limited fiscal space.”

Albania and North Macedonia remain stuck in EU accession process
COMMENT: Towards sustainable, safe and smart roads in the Western Balkans
Prime minsters of Albania and Montenegro visit Kyiv in show of support