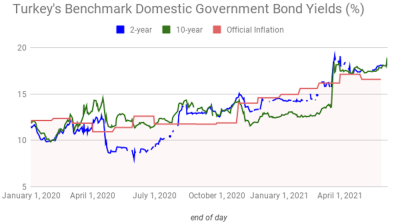 The share of Turkey's public banks in the country's domestic sovereign bonds stock reached 36.4% at end-April, extending the run of all-time highs recorded since last year, BloombergHT reported on June 9.

In July 2020, the figure surpassed the 30% level. It has consecutively smashed through record levels ever since.

Meanwhile, the foreign investor share in the market hit a record low level of 3% in September last year before gradually recovering to 4.7% in February. The figure stood at 3.7% at end-April.

Since 2019, it has been hard to describe the local domestic government bond market as a functioning market. The rising share of FX-denominated domestic borrowing is another woe.

Nevertheless, the government has maintained absolute control over the local finance industry. Thus, domestic borrowing has not proved to be a problem.

Following the currency shock of 2018, the capital of the public banks was hiked via the exchanging of government papers among the Treasury, the Turkey Wealth Fund (TWF/TVF) and banks.

Yet the amount of a single controversial loan, extended by Ziraat Bank, stands at more than 10 times this figure. Ziraat is yet to provide a payment document on the instalments of a $750mn loan extended to Demiroren Holding for the acquisition of Dogan Media.