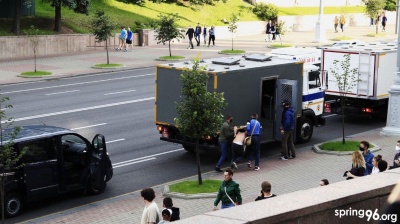 Arrests were made in several parts of Minsk, said Belarusian human rights organisation Viyasna, which has published a list of 188 detainees.
By bne IntelliNews July 15, 2020

Hundreds of people took to the streets in the Belarusian capital Minsk and other cities on the evening of July 14 after the main opposition candidates were blocked from standing in the August 9 presidential election.

The demonstrations were initially calm, with protesters clapping the two would-be candidates, and passing motorists tooting their horns in support, according to newswire reports.

“In the evening of July 14, people took to the streets of different cities to protest against the denial of registration of alternative nominees Viktor Babaryka and Valery Tsapkala as presidential candidates,” the NGO said on its site spring96.org.

“Detentions began at about 8pm. Detentions have taken place and continue to take place in different parts of the city: on and near Victory Square, near October Square, on Nemiga, near the circus, etc. Riot police and plainclothes officers used brute force, beating people with truncheons, kicks and fists.”

Among them were two RFE/RL journalists, who were detained while making a live broadcast in Minsk.

Babariko, an ex-banker detained a month ago on money-laundering and bribery charges, was excluded from the ballot because of the criminal investigation against him, according to the election commission.

Tsepkalo, a former ambassador to the US and founder of a successful high-tech park in Minsk, was also rejected after a large proportion of signatures supporting his presidential bid were nullified.

Babariko and Tsepkalo, both of whom had no political experience before they announced their presidential bids this May, had been widely considered as the strongest contenders against Lukashenko, as the incumbent president, who has ruled Belarus since 1994, faced popular frustration over the economy and his handling of the coronavirus (COVID-19) pandemic.

Apart from Lukashenko, the central electoral commission has registered Svetlana Tikhanovskaya, the wife of popular opposition blogger Sergei Tikhanovsky, who has been jailed for several weeks following anti-Lukashenko protests in May, and three obscure candidates, Anna Kanopatskaya, Andrei Dmitriyev and Sergei Cherechen.

A wave of strikes sweeps Belarus as workers walk out in protest against the stolen election
MOSCOW BLOG: Does Lukashenko have enough forces to oppress the entire country?
Belarus inflation in July remained flat compared to June at 5.2% year on year